Value of Iput assets rises but rate of growth slows 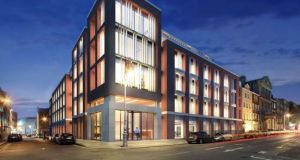 The value of Irish property fund Iput plc’s assets rose to €2.3 billion by the end of 2017, although its growth rate slowed compared to the previous quarter.

In a quarterly update, the fund said its net asset value had increased by 2.7 per cent in the fourth quarter compared to an increase of 5.9 per cent between the second and third quarter.

Despite the slowing growth, shareholder returns for the quarter increased by 0.9 per cent and were up by 9.5 per cent to €86.6 million in the 12 months to the end of December.

Having collected €25.3 million in rental income, the fund recorded an increase in rental values across all sectors of its portfolio last year with the industrial portfolio growing the most, or by 9.6 per cent, in value terms. Overall, the growth rate was 5.8 per cent for 2017.

The most significant letting in the quarter was the deal with AIB for the company’s flagship 10 Molesworth Street project. AIB will occupy the entire 115,000sq ft of the office building due for completion in the first quarter of 2018.

Meanwhile, Specsavers signed a 15-year lease for retail space in the company’s 40 Molesworth Street development, while demand for office space at the Exchange development in the IFSC was reported to be “strong”.

On the stamp duty change announced in October’s budget, the Iput trading update said the increase was largely negated by its “ongoing asset management activities and further yield compression across our prime office assets”.

The stamp duty increase from 2 per cent to 6 per cent didn’t stop the company’s transactional activity either, with the acquisition of Gardner House for €63 million completing in the quarter. Additionally, the fund acquired a unit in the northwest business park, Dublin 15, for €12.3 million - which it plans to upgrade - while it sold 73, 74 and 75 on Patrick street, Cork, for €6.5 million.