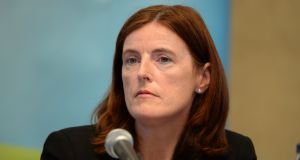 Rosheen McGuckian is also a director of the Strategic Banking Corporation of Ireland and the Social Innovation Fund of Ireland.

Commercial property firm Green Reit has announced the appointment of Rosheen McGuckian, who is chief executive of infrastructure company NTR, as a non-executive director.

Ms McGuckian, whose appointment will take effect from January 1st, 2018, will also be appointed to the firm’s audit committee.

After joining NTR in 2008, Ms McGuckian was made chief executive of the unquoted Irish company that acquires, constructs and manages sustainable infrastructure assets, in April 2013.

Prior to joining NTR, she was chief executive of GE Money Ireland, the consumer finance division of General Electric, having joined GE in 2002.

Ms McGuckian is a director of the Strategic Banking Corporation of Ireland and the Social Innovation Fund of Ireland.

“We are delighted to welcome Rosheen to the Board of Green Reit,” he said. “Rosheen is an experienced board director and business leader who has successfully operated at a senior management level in Ireland.

“Rosheen will bring significant expertise to our Board and we are pleased to announce her appointment.”