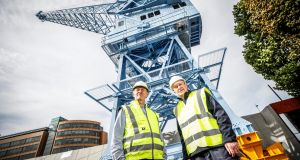 There were 80 construction cranes visible over the centre of Dublin on December 1st – up one on the previous month’s total and more than 135 per cent above the 34 cranes recorded on February 1st, 2016, when the newspaper’s crane survey was launched.

Building work is still most evident south of the Liffey, where there were 57 cranes (one up on last month) while the crane count stands unchanged at 23 north of the Liffey.

However, clearance work is proceeding at pace on some very sizeable sites beside the new Central Bank building on North Wall Quay just as some of the largest schemes on the southside approach completion.

Some commentators believe we’re close to the peak of development in this cycle. Tony Waters of HWBC, for example, sees evidence of a slowdown in new office starts, meaning less space is likely to come on stream from 2019 on.

This month’s crane count was conducted from the seventh floor of the Irish Times building on Tara Street and partly from a renovated 1950s Stothert & Pitt crane close to the entrance of Dublin Port.

Crane 292 is a major part of Dublin Port’s €6 million plan to better integrate itself with the city and makes for a distinctive sight along East Wall Road. Many thanks to its former operator, Liam O’Brien, for showing us around.