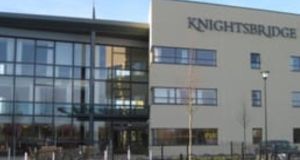 Carechoice’s acquisition of Knightsbridge Care Village in Trim, Co Meath, will bring its long-term residential care beds to 620 and total staff numbers to 800.

Carechoice plans to buy Knightsbridge Care Village in Trim, Co Meath, from Barchester in a move that will grow the nursing home operator to 620 beds.

The group said the deal is being done for a undisclosed sum. Industry sources estimate the transaction is worth about €20 million.

Carechoice’s purchase is the first since French group InfraVia bought the business earlier this year for about €70 million, a move designed to aid the Irish group’s growth.

“When Carechoice was acquired by InfraVia in June of this year, we said it would underpin our expansion plans and today’s announcement is evidence of that,” Mr Kingston said.

He noted that Carechoice already runs six centres in Dublin, Cork and Waterford and explained that Knightsbridge would bring its long-term residential care beds to 620 and total staff numbers to 800.

Knightsbridge opened almost 10 years ago and its new owners said the facility and staff had developed a reputation for high-quality care. The complex has a primary care centre and seven independent living units.

It was Barchester’s sole Irish property. The group’s chief executive, Dr Pete Calveley, said it was confident that Carechoice was committed to the highest possible standard for the residents.