M&S expands northside offering and opens in the Omni

Also: Holiday lets on Grafton Street as aparthotel, and strong sales in Cork 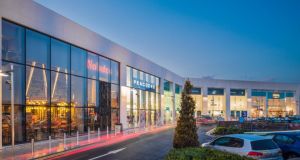 Marks & Spencer has opened its first store in the Republic since 2010, a substantial food outlet at the Omni Park Shopping Centre at Santry, Dublin 9.

Stephen Murray of agent JLL, who handled the letting, said M&S had been anxious to strengthen its representation in north Dublin, where it also has stores at Mary Street as well as Liffey Valley and Blanchardstown shopping centres.

Other trading opportunities countrywide are likely to be considered for similar stores, according the M&S agent, Caren Leon of CBRE.

The owners of Omni Park have continued to develop the centre since it opened in the early 1990s and are planning further expansion.

Holiday lets on Grafton Street
Three upper floors of the Permanent TSB building on the corner of Grafton Street and Harry Street in Dublin 2 will be converted into 16 apartments after being leased to City Break Apartments by Johnny Ronan’s Ronan Group Real Estate. The new 35-year lease has an annual rent of €150,000 with five-yearly rent reviews. The guesthouse/aparthotel is due to be up and running by next March and will have bedrooms with a kitchenette, bathroom and seating area.

Strong sales in Cork
QRE’s new Cork office operated by Will Lyons has sold a block of student apartments off Sullivan’s Quay in Cork city centre as well as a multi-tenanted office block at Dublin Hill for considerably more than the asking prices.

The office block, Kinvara House, was sold at €940,000, an impressive €290,000 above the guide price. The tenants include Cork Drugs Task Force, Whelan Accountancy and Permanent TSB.