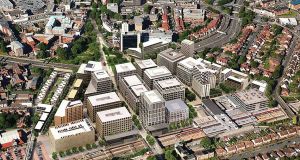 Coventry City Council is set to invest in a development by Irish property group Cannon Kirk in a bid to kickstart a multi-million pound sterling scheme that has been dogged by delays.

The council is forming a joint venture with Friargate LLP - a Cannon Kirk company - to speed up the delivery of a second building to ensure the future viability of the £100 million (€112 million) Friargate development, a massive urban regeneration programme that is located next to the train station in the heart of the city.

A report in the Coventry Telegraph earlier this week suggested the council was taking the stake in the Friargate site in a move to help the developer settle a remaining debt with Nama so that work can continue on the development, which was being used as loan security.

However, Dublin-based Cannon Kirk has categorically denied the report, noting that it exited Nama earlier this year after securing financing from US private equity giant Oaktree to help repay its outstanding debt with the State’s bad bank.

Cannon Kirk, owned by Mayo brothers Michael and Cathal Cannon and developer Owen Kirk, has mostly been active in England in recent years, where it also has development sites in Cambridgeshire and Plymouth. However, its portfolio also includes sites in north Dublin, Kildare, Wicklow and Louth.

In a statement Coventry council said it “is preparing to take on 50 per cent of Friargate LLP in order to drive the regeneration of the area forward and ensure that investment into Coventry continues.”

The move is expected to help unlock more capital with as much as £150 million having been identified by the West Midlands Combined Authority to fund regeneration in Coventry. Of this, approximately £51 million is to be allocated to Friargate to build Two Friargate - the second building on the 37-acre site.

Comprising 3,200,000 sq ft of mixed use development, the urban regeneration scheme is to contain 25 buildings, including Grade A office space, shops, restaurants, two hotels and new homes. As of now, just one of the intended buildings has been completed, an 11-storey tower which is to be home to 1,350 Coventry City Council staff.

Planning permission for the development was secured in 2012. Stephen Reynolds of Friargate LLP told The Irish Times he was disappointed by the reporting in the Coventry Telegraph, which he said was “completely inaccurate.”

“The council approached us on this. We’ve had a partnership of sorts with them for the last five or six years, because they own some of the land and we have an agreement about being able to draw some of it down. What they are offering now is to formalise the relationship into a joint venture to help unlock new money,” he said.

Mr Reynolds added that while there had been delays, these were primarily a result of experiencing difficulties with utilities.

“We’ve not progressed the site as fast as we’d like but the real problem that has dogged us over the last 12 to 18 months , but which is now just about resolved has been getting utility companies on site,” he added.

The Cannon brothers’ most high-profile purchase was in 2007 when they acquired development land at the Checkpoint Charlie site, the iconic border crossing between east and west Berlin during the Cold War, for €29 million. The purchase was financed by AIB loans that were later transferred to Nama. The sites were subsequently sold two years ago for about €85 million to a German developer with the proceeds understood to have been used to reduce the company’s Nama loans.

Cannon Kirk sued Nama earlier this year over an alleged €15 million loans redemption “penalty” that the bad bank was planning to impose as the firm sought to refinance its borrowings elsewhere. It is understood the case was subsequently settled.