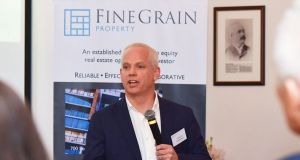 Former Jurys Inn/Amaris executive Cormac Ó Tighearnaigh is CEO of Fine Grain, which is seeking to raise up to €75 million in equity

Fine Grain Property, an Irish-Singaporean investment company chaired by former Telecom Éireann chairman Ron Bolger, is assembling a new fund with a warchest of up to €150 million to target Irish commercial property.

Fine Grain, whose chief executive is former Jurys Inn/Amaris executive Cormac Ó Tighearnaigh, is seeking to raise up to €75 million in equity, which will be leveraged to borrow a similar amount, doubling its firepower.

The fund, FGPO Ireland Fund II, is Fine Grain’s second-such fund, after its first, with €100 million to invest, was assembled earlier this year in partnership with the State-owned Ireland Strategic Investment Fund (ISIF).

The first Fine Grain fund has already been substantially deployed, with major purchases including office blocks in Dublin and Galway, and also the development of a further office scheme in Galway.

The new fund will be managed by the financial and broking firm Davy, which has already held talks with some of its wealthy private clients who have expressed an interest in investing. It may also look to tap the networks of high net worth private investors in Asia that contributed heavily to the first fund.

Fine Grain said, however, that it expects the majority of the equity for the second fund to come from institutional investors.

The firm said that while it has developed a “good working relationship” with ISIF, it cannot say whether the State fund will also take a stake in the new fund. The fund will not be open to ordinary retail investors. Fundraising is expected to be completed in the middle of next year.

The new fund will continue Fine Grain’s established strategy here of targeting the purchase, development and redevelopment of industrial parks and logistics facilities aimed at multinationals, as well as local businesses. It targets “under-invested and under-managed” facilities for upgrade.

The first fund recently unveiled plans for a major office development at Parkmore East campus near Galway city, following a deal with IDA Ireland for a client of the State agency. It also bought an office block in East Point business park in Dublin from a private consortium that reportedly included judges, barristers and aviation investors.

Mr Bolger, a former KPMG managing partner, who is honorary consul of Singapore in Ireland, chairs both the Irish operation and the wider Fine Grain group, which was founded in Singapore by former HSBC banker Colin MacDonald. Mr Bolger is also a member of the Government’s Asia strategy group.

Mr Ó Tighearnaigh was a part of the senior team that drove a major expansion of the Jurys Inn hotel group in the UK, before the brand was absorbed to be the main plank of the Amaris group for US group Lone Star.