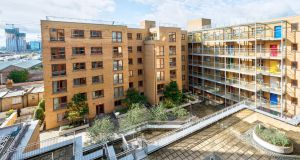 The apartments were substantially upgraded by David Carson, receiver of Jarmar Properties Limited, prior to the sale

One of the last remaining large-scale Dublin city centre apartment developments offered for sale in a single lot by the National Asset Management Agency (Nama), has been acquired by Kennedy Wilson for €45 million.

The selling agents Hooke & MacDonald were quoting a guide price of €37.5 million for the 124 apartments at the North Bank. The development was built before the property crash by Liam Carroll’s Zoe Developments.

The 124 apartments in North Bank comprise 31 one-bedroom units, 64 two-bedroom homes and 29 three-bedroom apartments. There are also 85 car-parking spaces and a vacant ground floor commercial building extending to 1,530sq m (16,468sq ft), which Hooke & MacDonald estimated would eventually bring in a rent of around €150,000 per annum.

The apartments were substantially upgraded by David Carson, receiver of Jarmar Properties Limited, prior to the sale.

“We are particularly pleased to secure Northbank as one of the few remaining unbroken 100+ unit multifamily assets left to trade in Dublin. The North Docks is a rapidly expanding sub market where we want to grow our footprint,” said Mary Ricks, chief executive of Kennedy Wilson Europe.

1 Who are Ireland’s 17 billionaires?
2 My father in a nursing home wants to gift me his house
3 Nama lends Cosgraves €15m to fund huge apartment development
4 Long-hyped smart fridges will never run out of milk or data
5 Are there annual limits on inheritances or gifts to a child?
6 Property firm sues engineering company over waterproofing of basement
7 Health insurance: Switch often for your financial wellbeing
8 Builders completed 21,500 homes in State during 2019
9 Irish whiskey sales slow in US but distillery visitors top 1m locally
10 Cubic Telecom raises more than €11 million in funding
Real news has value SUBSCRIBE