Big-screen potential for former cinema in Fairview at €2.75m 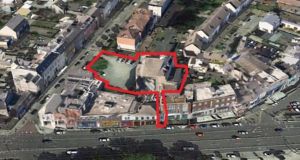 A five-storey former cinema and car park in Fairview with obvious redevelopment potential on 0.5 acres is quoting €2.75 million through Lisney.

The property, at 18 Fairview, adjacent to Tesco Express and 45-47 Fairview Avenue Lower in Dublin 3, is zoned Objective Z4 district centre to provide for and improve mixed-services facilities.

Higher densities are permitted in areas zoned district centres, particularly where they are well served by public transport, as in Fairview. Planning permission was previously granted (for the Fairview Avenue part only) in October 2002 for 23 apartments and two retail units at ground floor level in a four-storey building over a basement car park.

The site is 1.5km from Connolly Station, within walking distance of Clontarf Dart station and East Point Business Park, and numerous bus routes pass nearby.