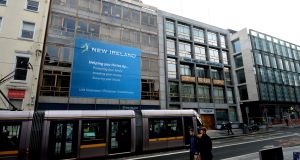 The headquarters of New Ireland Assurance on Dublin’s Dawson Street has been sold for €38 million. Photograph: Cyril Byrne

The fast growing Press Up hospitality group has outbid several property developers to purchase the headquarters of New Ireland Assurance on Dublin’s Dawson Street. The group led by Paddy McKillen jnr and Matt Ryan is paying €38 million for the two interlinking five- and six-storey office blocks, which attracted a high level of interest and two rounds of bidding because of their redevelopment potential.

Savills director of planning, Mark Reynolds, had been quoting in excess of €35 million for the buildings, which date from 1964 and 1971.

Press Up is not expected to demolish and redevelop the buildings, merely to convert the ground floor into restaurant and other retail uses and to add an extra office floor to bring the overall office content to about 6,503sq m (70,000sq ft).

Press Up operates one of the largest chains of restaurants and cafes in the city, including Roberta’s and Elephant & Castle in Temple Bar, Angelina’s at Percy Place and the Stella Cinema in Rathmines.

Reports that most of the property companies that inspected the New Ireland block had planned to demolish it and replace it with a high volume office development and a range of shops at street level prompted Dublin City Council to consider whether to include the building in the Register of Protected Structures.

The formula now favoured by Press Up means the city council is unlikely to proceed with the new planning restrictions.

Press Up will be hoping to secure approval for anything up to 929sq m (10,000sq ft) of retail facilities on the ground floor.

The disclosure that Press Up has acquired the pension and insurance firm’s building will come as a surprise, as the firm had not been mentioned as a bidder in reports of the sales campaign.

Dawson Street has been undergoing major changes since the announcement and the subsequent introduction of the cross-city Luas service with two busy stops on the street. The changes already in train look like turning Dawson Street and the adjoining Molesworth Street into one of the most vibrant enclaves in the city.