Workspaces for rockstars? Flexibility is key to Iconic Offices

‘We would much rather be striking than bland,’ says founder Joe McGinley 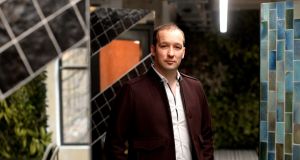 Joe McGinley of Iconic: “The clientele we attract are a little bit older than at other shared workspaces .” Photograph: Cyril Byrne 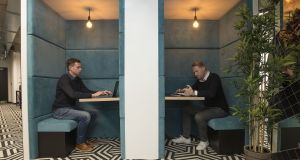 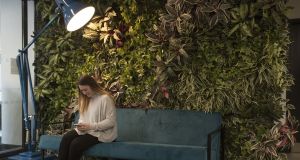 There weren’t too many estate agents who had fancy premises and fridges stocked full of champagne during the recession, but Joe McGinley was one of them.

The entrepreneur, who is now at the helm of Iconic Offices, the State’s largest flexible workspace provider, was determined to do things differently when he started out in business on his own. Downturn or no downturn.

“Everyone else in the real estate space was full of doom and gloom and was busy reducing their retail footprint. I figured there had to be a market for someone who would go balls-out and do the opposite,” he says.

“Subsequently, we went full-on with a landmark premises on Baggot Street that was all marble counters and champers,” McGinley adds.

The businessman is still very big into bling, as is evident by the various workspaces his company manages.

“We don’t need everyone to like our buildings. We would much rather be striking than be bland,” he says.

Iconic, which was started by McGinley in 2013 after he spotted a gap in the market while running his previous company Bespoke Estate Agents, has made a name for itself with its unique property portfolio, which now comprises 14 locations that collectively provide more than 2,000 desks.

The company claims it creates “workspaces for rockstars”. While its offices, which come complete with 7ft tall sculptures, compact cinemas and graffiti, are certainly loud, most of those working in them are more likely to model themselves on Chris Martin from Coldplay rather than Keith Moon.

“The clientele we attract are a little bit older than at other shared workspaces,” McGinley admits. “It isn’t young fellas sitting around on crates drinking beer. Most of our clientele may like having a drink but our offices are definitely workspaces for grown-ups.”

The entrepreneur plays an active role in the look and feel of the offices, all of which have their own unique design. The most recently opened workspaces include The Greenway, a 31,000 sq ft property close to St Stephen’s Green which cost about €2 million to refurbish, and The Victorians on Earlsfort Terrace, Dublin 2. The latter opened in February.

“We have a couple of other buildings due to come on before the end of this year, all of them in Dublin. We’ve also been offered buildings in Cork and Belfast, which would see us expanding outside of the capital for the first time but nothing is signed yet,” McGinley says.

“Typically we review between 25 to 30 buildings before we agree on one and have opened new workspaces at a rate of about four a year,” he adds.

Ireland has been witness to a sharp rise in shared working spaces over the last few years. Where once there were very few options outside the long-established Fumbally Exchange or the more traditional flexible work space arrangements provided by Regus, there has been a flood of new entrants in recent years. Most notable of these is the recent arrival of We Work, which has raised nearly $8 billion to fund its expansion to 50 cities worldwide. It now claims more than 100,00 members and revenues of more than $900 million per annum.

While market share remains relatively low with just 180,000 sq ft of business space leased as flexible workspace by operators in the Republic last year, this represents a near trebling of lettings versus the prior year.

McGinley believes there is still plenty of growth in the local market for Iconic despite the competition.

Last year, the firm doubled its headcount to more than 50 employees and it is now expecting employee numbers to double again over the next five years, a period during which it expects to increase the number of desks it offers from about 2,000 to 7,000.

Iconic Offices claims annual growth of more than 100 per cent year on year since it was founded five years ago, although McGinley is shy about disclosing revenue figures.

“In a way, the recession was a gift to me and my business because we never went to the bank for money because we presumed we wouldn’t get any. That meant we had to build a business that could stand on its own two feet from the word go. The business was completely bootstrapped until about 10 months ago,” he says.

“Our most profitable buildings are the most recent ones because they are larger and we’ve refined our business model and added amenities which increase and improve the client experience,” he adds.

If McGinley is worried about the arrival of We Work, he isn’t showing it.

“If anything, we see them coming in as a positive for us. Most people still don’t know that much about co-working in Ireland. It’s not the norm and We Work’s arrival helps educate the market and speed up the maturing of the sector,” he says.

Moreover, while We Work might have plenty of financial heft, McGinley says he has a few tricks up his sleeves as well.

“It is a tight market but we’re the market leader and are continuing to perform well. Even though space is tight, we always have some available to us and that is because we are delivering for 14 landlords currently and have a proven track record and a good covenant,” he says.

McGinley adds that the connections the company has built up over the years is another important factor. He says that as many as 75 per cent of the buildings it has secured have been acquired in off-market transactions with the business learning about them long before anyone else knows they are available.

“I think we’re seen as an Irish business and one that is helping local communities. I believe that gives us an edge. Our approach is also pretty personal so we don’t have your regular landlord/tenant relationship,” he says.

“We’re not the property owner but we’re typically operating buildings on a 25-year lease so it is a long-term relationship and we see it as a process of collaboration with landlords in terms of the design, inception and fit out of buildings,” McGinley adds.

While he may see plenty of growth locally, McGinley also talks about having ambitious plans to move into continental Europe. Iconic recently hired Deloitte to help it land an equity partner to fund part of its €60 million expansion strategy.

Among the markets the company is looking at are Germany and the Netherlands. McGinley rules out a move into London in the near-term as he believes there is little value there at present.

He says the company has been approached about diversifying, particularly into the co-living space. It’s a tempting prospect, he admits, but he has no plans to do something of this nature as yet.

“I think the magic happens when you’re focused on a single point and everyone is moving towards the same goal. I’m conscious of diversifying to the point where it becomes distracting,” he says.

For someone who readily admits to living in the future, distraction is something that McGinley is keen to avoid. He gave up drinking seven years ago to be 100 per cent focused on his business.

“In five years time, I expect Iconic to be a global brand operating in most countries across Europe and hopefully further afield as well and my focus is firmly on getting us there.”