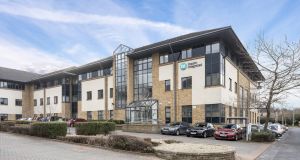 Beaver House, Clonskeagh, Dublin 14 was purchased by Appian Burlington as part of an €18 million deal.

A little-known Irish real estate fund has completed the purchase of an office building and a shopping centre in the Dublin suburbs, bringing its overall spend to more than €40 million in the past 12 months.

The Appian Burlington Property Fund is believed to have paid about €18 million for Beaver House, a modern three-storey office block in Clonskeagh, Dublin 14, and Boroimhe Shopping Centre in Swords.

The building is let to a quoted US multinational company and two privately run Irish firms, and has a strong upwards potential at the next rent review in 2020.

In addition to the two most recently acquired investments, Appian also manages five other properties, bringing the overall value of the portfolio to €43 million and the income yield to 7 per cent.

The first five investments assembled by the fund were the Bank of Ireland in Drogheda, Fenward House in Sandyford, Co Dublin, Tuansgate in Tallaght town centre and two Cork properties, 73 Patrick Street and 74/75 Patrick Street.

The fund is a joint venture between Appian Asset Management, founded in 2003 by Patrick Lawless, and Burlington Real Estate, set up in 2012 by former Treasury Holdings team John Bruder and Niall Kavanagh.

Mr Bruder told The Irish Times the fund was set up to look beyond the obvious property hot spots in Dublin and to target relatively high-yielding properties with good tenants in less obvious locations.

“There remains good value in the Irish property market,” he said, “as evidenced by the fact that the best measure of the commercial property market, the IPD Index, is still down 43 per cent relative to the capital values prior to the downturn in 2008”.

According to Kevin Menton, a director of Appian, the new fund was designed to produce an annual income yield to investors of at least 5 per cent together with capital value growth in the medium term – “and it is delivering exactly that”.

The fund is restricted to qualifying investors; the minimum investment is €100,000.