Next to open flagship store on Dublin’s Henry Street

Fashion retailer will pay rent of €1.8m for premises due to open in run-up to Christmas 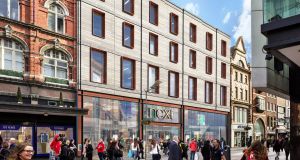 The UK fashion retail chain Next is to open a new Dublin flagship store on Henry Street in the run-up to Christmas, according to the owners of the building, Fitzwilliam Real Estate Capital (FitzREC). The fit-out of the new premises at 7-9 Henry Street is due to start in autumn.

The new arrangement means that Next will be vacating its double unit in the nearby Jervis Shopping Centre, where it has been trading for more than 20 years.

The company is to pay a rent of about €1.8 million for the four-storey store which will have a floor area extending to 3,300sq m (35,521 sq ft) and a high-profile 25m frontage on to Henry Street.

FitzREC confirmed the deal with Next following interest from a number of international companies already trading here and others looking to enter the Irish market for the first time.

Noel Smyth, managing director of FitzREC, said Henry Street and the greater surrounding area was often referred to as the “heart of the city” and Next would be a welcome addition to what was undoubtedly one of Dublin’s busiest shopping districts.

“Presently we are involved in a number of proposed new developments and enhancements in the greater area around Henry Street, both retail and residential, which will continue to reinvigorate the north inner city, giving thousands of consumer’s new reasons to shop, work and live here.”

Karl Stewart of letting agent Cushman & Wakefield, who acted for FitzREC, said the letting of 7-9 Henry Street to Next and the recent announcement by JD Sports of their plan for a new flagship store in the Jervis Centre confirmed that the demand for retail space in the city centre remained resilient despite external challenges.

Additionally, the Henry Street area had seen much improvement of late and the introduction of the Luas Cross City service had greatly helped to enhance this part of the city.

UK sports and fashion retailer JD Sports is planning to take over a flagship store of 3,251 sq m (35,000 sq ft) in the Jervis Centre. The company has agreed an annual rent of €2.15 million for its extensive outlet which will also incorporate the adjoining 427 sq m (4,600 sq ft) currently occupied by Next.

That trader is apparently to be compensated for agreeing to surrender its lease almost 12 years before it is due to run out.