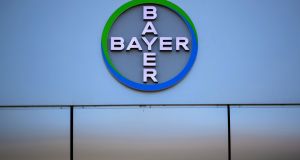 A US federal court in San Francisco found on Tuesday that Roundup, a best-selling herbicide owned by Bayer, had been a “substantial factor” in causing the cancer of Edwin Hardeman. Photograph: Bloomberg

Shares in Bayer shed a tenth of their value on Wednesday, after the German pharmaceutical and chemical group suffered another setback in its legal battle to prove that glyphosate-based weedkillers do not cause cancer.

A US federal court in San Francisco found on Tuesday that Roundup, a best-selling herbicide owned by Bayer, had been a “substantial factor” in causing the cancer of Edwin Hardeman, the plaintiff.

The jury verdict does not mean that Bayer is liable to pay damages – a question that will be settled in the second phase of the trial – but it deals a blow to Bayer’s legal campaign all the same. A defeat in the Hardeman case would be the second glyphosate ruling to go against the German group, which faces more than 11,000 similar cases in the US.

Roundup became part of Bayer’s portfolio when it took over US seed group Monsanto in a $63 billion (€55 billion) deal last year.

The latest setback sent Bayer shares down 10 per cent to €62.40 in early Frankfurt trading on Wednesday. Over the past 12 months, the group’s market value has dropped by more than a quarter – mostly as a result of investor concerns over the legal risk linked to glyphosate.

“We are disappointed in the jury’s initial decision, but we continue to believe firmly that the science confirms that glyphosate-based herbicides do not cause cancer,” Bayer said after the verdict. “We are confident the evidence in phase two [of the trial] will show that Monsanto’s conduct has been appropriate and that the company should not be liable for Mr Hardeman’s cancer.”

The Hardeman case is a so-called bellwether case, which means that it is likely to serve as a template for hundreds of similar claims. In the first glyphosate trial, which was concluded in August last year, a jury ordered Bayer to pay $289 million in damages. The sum was later reduced, and the verdict is still under appeal. But it caused a torrent of similar claims across the US and triggered a steep fall in Bayer’s share price. – Copyright The Financial Times Limited 2019

1 Flights abroad ban could last all summer
2 Economic self-harm is at the root of populism
3 Why are markets booming when a crash is on the way?
4 How much do Irish people earn? And what will Covid-19 do to our wages?
5 Brexit: System agreed for Irish goods to skip checks on UK trade
6 Nine more suing INM and Leslie Buckley over alleged data hacking
7 ‘The rental situation stops me moving back home’
8 Stocktake: Playing poker with the day traders
9 What is the truth about paying tax in Ireland?
10 Ireland faces 'deep downturn' this year and may not rebound until 2024 if there is a second wave
Real news has value SUBSCRIBE