No buttering up between warring Kerrygold and Glanbia 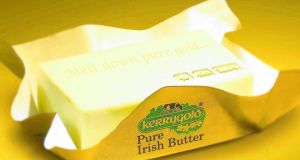 Ornua didn’t send Glanbia a Valentine, but it did send it a message: the Kerrygold owner launched a massive new digital advertising campaign reinforcing its “grass-fed” marketing claims.

Love, or the promise of it, has always been a part of the Kerrygold story. Buttery amour is smeared suggestively all over the brand’s vintage advertisements.

Who over the age of 35 can’t remember André, the handsome French visitor who takes off his cap before shuffling tightly up behind the demure Irishwoman frying the fish he has just caught, asking: “There is something I can ’elp?”

Yes, you really should go and put a bit of butter on the spuds, André. And while you’re at it, you dirty rascal, drop a big knob of it fresh from the fridge down the back of your tweed jumper. It might cool you down.

Then there is the undeniable little frisson between the Irish widower selling a horse, and the sultry Frenchwoman who comes to buy it. Why is it always those voracious Gauls leading us innocent locals astray?

The widower’s elderly cook picks up on their furtive glances and she looks none too pleased, adopting the painful visage of a bulldog licking acid off a razor blade. The widower’s son, meanwhile, picks up on it too. But he backs his dad to spend more time with her because we all know that boys, especially the kindly yet lonely ones, just want to have fun: “Who’s taking the horse to France?”

Giddy up out of that, you pair. Either that, or get a room. I’m sure your jolly cook will bring you up a lovely breakfast in bed in the morning.

This week, Valentine’s cards were exchanged between lovers up and down the land. It would want to be a fairly esoteric love affair to also mark the occasion with the present of a half-pound of full-fat Kerrygold. Chocolate is probably more appropriate. But at this time, love is definitely on the agenda everywhere.

Or almost everywhere. There is currently little love lost between Kerrygold’s co-operative owner, Ornua, and its 25 per cent shareholder, Glanbia. The relationship froze over last November when Glanbia Ireland launched a competing dairy brand in the US, which is Kerrygold’s most lucrative market.

As if that wasn’t bad enough from the perspective of the non-Glanbia dairy farming world, Glanbia’s new US product is called Truly Grass Fed. Kerrygold has built its entire US marketing persona on its claim that its butter is made from the milk of cows that are fed on grass.

What was Glanbia suggesting, the conspiracy theory goes – that only its product, and not Kerrygold’s, are derived from the milk of cows that are “truly” grass fed?

The fact that Glanbia’s US launch also broke the surface slap-bang in the middle of a US consumer lawsuit, in which Ornua is trying to rebuff criticism of its grass-fed claims, only heightened the sense of a former lover being mocked.

In this civil war, Glanbia’s US launch of Truly Grass Fed may turn out to be its Soloheadbeg. It is becoming that bitter. As the row garnered headlines three months ago, after Ornua cancelled a directors’ meeting that was due to be attended by the two Glanbia nominees that sit on its board, both sides resolved to take their tiff out of the public arena.

Talking to people this week in the Irish dairy farming community and the corporate entities that monetise its wares, it appears there is yet to be a thaw in this frosty row. It hasn’t gone away, you know. And it won’t anytime soon.

If Glanbia was mischievous enough to send Ornua a sarcastic Valentine’s card this week, what do you think it would say? I’d go with: Rose are red/Violets are blue/Your cows are grass fed/But ours are too.

Ornua certainly didn’t send Glanbia a Valentine. But it did send it a message: the Kerrygold owner launched a massive new digital advertising campaign reinforcing its “grass-fed” marketing claims.

Ornua will also have been heartened after it scored a victory in its US consumer lawsuit this month, convincing the judge that the “your cows aren’t grass fed” case should be thrown out, although the plaintiff does have leave to try again.

Other shareholders in Ornua, which include Dairygold and Lakeland Dairies, are known to be furious with Glanbia for what is seen by some as a brazen attempt to undermine the Kerrygold brand whose commercial success has gilded the larders of dairy farmhouses across Ireland, especially in Munster.

“Whatever trouble happens, it will eventually fall back on the farmers,” said one. They feel stabbed in the back.

What is Glanbia’s long-term strategy, others wonder? They hope Ornua is not weakened. But the real conspiracy theory goes a little like this: perhaps Glanbia thinks it can take on Kerrygold toe to toe, and it secretly wants out of Ornua altogether, possibly with the other shareholders buying it out.

Glanbia vehemently denies its future in Ornua is in doubt, and says it remains “fully committed”. With two Glanbia nominees in the Ornua directors nest, the December board meeting is understood to have taken place. None was scheduled in January, but another was due this week.

The other side of this argument, of course, is that Glanbia has every right to compete with Ornua and Kerrygold. This is commercial reality, folks, and there’s plenty of room for everyone. Compete or die, and you never know: the exercise might even make you stronger.

Kerrygold, Ireland’s greatest indigenous food export, is love. And it is also loved. Worshipped, even, by the Irish dairy farming industry.

But depending upon which side of the fence you are on in this row, you might well ask if Kerrygold should be seen as a sacred cow. Or has it turned into a golden calf?

– It’s on. Ian Drennan, the director of corporate enforcement, whose office is known as the ODCE, is about to become the first head of that outfit in nine years to appear before the Oireachtas joint committee on business and enterprise.

The corporate watchdog will lead an ODCE delegation next Tuesday afternoon to one of the committee rooms in the bowels of LH2000, the “new” part of Leinster House. The clerks mightn’t be too pleased about it, but those planning to attend should bring popcorn. It may be a lively affair. The TDs and senators of the committee are champing at the bit to question Drennan.

He has been in the job for more than six years. Most of that time has overlapped with investigations into, or legal proceedings concerning, the collapse of Anglo Irish Bank. The risk of him saying something, or of his inquisitors making comment, that could have affected those vitally important cases effectively precluded him from attending the committee.

Now that all of the cases against former Anglo executives and directors, such as Seán FitzPatrick (not guilty) and David Drumm (guilty), have concluded, there is little discernible reason for Drennan to no longer appear.

He investigates breaches of company law. There will always be some ODCE case going on somewhere that he will have to be careful about mentioning in public. The risk of prejudicing proceedings cannot be a reason in perpetuity to not have him as a committee witness.

As correspondence obtained under freedom of information rules by Irish Times journalist Simon Carswell shows, there has been no shortage of back and forth between Drennan and committee members over the timing and arrangements of his long-awaited appearance.

Ostensibly, his appearance is to discuss the proposed strengthening of the ODCE into an independent agency with greater powers and a €6 million budget. In reality, the committee members may also try to question him indirectly on some of the catastrophic ODCE failures that sullied parts of the Anglo investigation.

Although he is the sheriff in this town on company law, Drennan is not himself a law man, according to his LinkedIn profile. He is an accountant, although he also has a diploma from the King’s Inns on white-collar crime. On Tuesday we may find out if bean counters are as effective as lawyers at bobbing and weaving under pressure.