Co Limerick company agrees new €1.5m deal to sell its technology for use in France 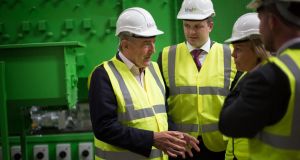 Irish waste-to-energy company BHSL has agreed a new €1.5 million deal to sell its technology for use in France. It has also confirmed it is close to completing a funding round to raise €10 million.

This is €2 million more than previously guided by the company and will bring total fundraising to date to about €30 million.

The technology was originally developed to convert poultry manure into energy but it is now used in much wider applications.

Under the agreement, Liger Bioconcept, which operates a 1.4 megawatt thermal plant at a fertiliser plant in Brittany will burn digestate (or by-product) sourced from a large anaerobic digestor located nearby that processes a mixture of food waste, animal manure and waste water sludge into biogas.

It will produce heat to help power the fertilizer plant, and an ash with high phosphorus and potassium content that can be used to make fertilizer pellets.

There are currently 500 anaerobic digester facilities in France and 8,000 in Germany, two of BHSL’s target markets, and the company said it has 14 similar deal prospects in its pipeline.

“We’re very pleased to have signed what we hope will be the first of many deals to use our technology in what is a huge potential target market. We are in active discussions around several further opportunities, and the installed base of anaerobic digesters is forecast to grow considerably,” said BHSL executive chairman Denis Brosnan.

“As regulatory standards continue to increase, BHSL stands to benefit as businesses look to manage their waste and emissions to create valuable energy whilst also meeting their environmental responsibilities,” the former Kerry Group chief added.

Founded by brothers Jack and Declan O’Connor in Co Limerick a decade ago, BHSL started out converting waste into energy but it has expanded into related sectors on the back of buying wastewater and effluent treatment company Hydro International in 2017, and waste processor Glanway earlier this year.

The deal is to be formally signed at a pre-St Patrick’s Day event at the Irish Embassy in Paris on Thursday attended by Minister for Foreign Affairs and Trade and Tánaiste Simon Coveney.

1 Why gift a son now if it eats into his tax-free inheritance threshold?
2 Dublin council puts Unicorn restaurant demolition plan on hold
3 Can we finally say farewell to the scourge of hot-desking?
4 Mortgage arrears: Prevention is definitely better than cure
5 Dispute over €2.95m sale of Georgian property struck out
6 Big Four told to outline plans for audit split in UK by October
7 Flights abroad ban could last all summer
8 Ballymore acquires London shopping centre for €83m
9 Deloitte was top Irish dealmaker in first half of this year
10 All parties to High Court hearings told to wear facemasks
Real news has value SUBSCRIBE