Current mangement at Silver Hill to continue to lead the business 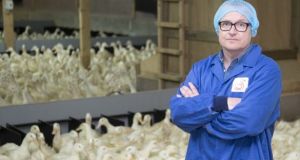 Silver Hill’s managing director Stuart Steele described the acquisition as “a good news story” for employees, suppliers and customers, particularly given the uncertainty caused by Brexit.

“Fane Valley has been our long-term feed nutrition partner for over two decades, so this was a very natural fit for both companies,” he said.

Management at Silver Hills, which supplies 98 per cent of the European market for head-on ducks, are to continue to run the business with two representatives from Fane set to join the board.

Silver Hill was founded over 50 years ago by Ronnie and Lyla Steele in Emyvale, Co Monaghan with just six ducks. It now processes up to 85,000 ducks a week, the majority of which are for export. The company employs over 200 people and its products are bought by many top class restaurants in Ireland and the UK.

Fane chief executive Trevor Lockhart said the company was committed to future investment in production facilities at Silver Hill’s Emyvale site to enable it to meet growing demand, particularly in Asian markets including new areas such as Malaysia, Indonesia and Vietnam.

“We are excited by the growth prospects and the opportunities this will present for all stakeholders in the business including the dedicated grower base,” said Mr Lockhart.

Fane has annual turnover in excess of £525 million (€615 million), with over 2,100 employees across sites in Ireland, England and Belgium.

1 Why are markets booming when a crash is on the way?
2 Permission sought for €150m film and media campus in Wicklow
3 Your old car could be telling others all your personal data
4 Government committed to finalising roadmap for safe overseas travel ‘shortly’
5 Drink tax row; no respite for Bewley’s; and mortgage U-turn at AIB
6 Covid-19: Publicans and restaurateurs row over calls for VAT cuts
7 AIB U-turn on mortgage block for those on Covid wage subsidy
8 Vodafone to speed up 5G rollout using DSS technology
9 Pfizer and BioNTech’s Covid-19 vaccine trial yields positive results
10 Ryanair still planning 3,000 job cuts
Real news has value SUBSCRIBE