Maximum aid that can be distributed per farm over three years to rise to €25,000 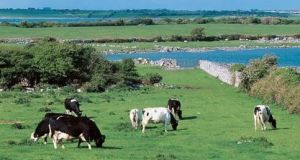 The Republic and other member states will be allowed to increase state aid to farmers in times of crisis without seeking specific EU approval, the European Commission has announced.

Under the revised state aid rules, farmers will be able to receive up to €25,000 in some circumstance in support from the government over a three-year period.

This payment can be given without prior approval from Brussels, which has strict rules around competition and tightly monitors the potentially market-distorting effects of any payments from government.

The move, an easing of strict state aid rules ahead of what is seen as a potentially disastrous no-deal Brexit, places the onus firmly on the member states to find the cash to do so.

The Commission statement does not specifically refer to Brexit.

“In some cases, the amount of State aid that can be provided to individual farmers will be increased by 66 per cent. These new rules will continue to accompany the normal rules for notified state aid, which member states may continue to apply.”

For example, if a country does not spend more than 50 per cent of its total national aid envelope on one particular agricultural sector, the ceiling will be raised to €25,000.

Similarly, limits on what percentage of a country’s annual agricultural output will be increased to from 1 per cent to 1.25 per cent initially, rising to 1.5 per cent if the member state hits the same technical criteria.

This so-called “de minimis” aid is typically used by member states when they need to act quickly without setting up a scheme in accordance with state aid rules, notably in times of crisis.

It is also commonly used for very specific purpose, for example to help prevent or eradicate animal diseases as soon as an outbreak occurs, or to compensate farmers for damages caused by animals that are not protected under EU or national law such as wild boars.

Separately, the commission has also given state aid approval for a payment of €5.75 million to support the construction of a new production facility by West Cork cheese producer Carbery Food Ingredients.

The company is planning the new facility to produce mozzarella cheese rather than cheddar, which has been its traditional focus.

Cheddar producers are especially exposed to Brexit risks as the product is only popular in the UK and Irish markets. The state aid payments are set to be made over a three year period by Enterprise Ireland.

Welcoming the news, Minister for Business Heather Humphreys said she had been engaging “intensively” with Mr Hogan and EU competition commissioner Margrethe Vestager in recent months.

“I am delighted to have received this very positive news today following many months of engagement on the case. I met with Commissioner Hogan late last year, who has worked very closely with me to ensure that we got the green light today.”

“Supporting market diversification is a key part of the government’s Brexit response and I would like to commend Carbery Food Ingredients for standing ready to pursue this important project,” the Minister said.

1 Why are markets booming when a crash is on the way?
2 Your old car could be telling others all your personal data
3 Permission sought for €150m film and media campus in Wicklow
4 AIB U-turn on mortgage block for those on Covid wage subsidy
5 Government committed to finalising roadmap for safe overseas travel ‘shortly’
6 Covid-19: Publicans and restaurateurs row over calls for VAT cuts
7 Drink tax row; no respite for Bewley’s; and mortgage U-turn at AIB
8 Staff at Bewley’s cafe on Grafton Street are made redundant
9 Dunnes Stores trials online ordering from Cornelscourt outlet
10 Vodafone to speed up 5G rollout using DSS technology
Real news has value SUBSCRIBE