Origin Enterprises spends up to €15m on Brexit planning 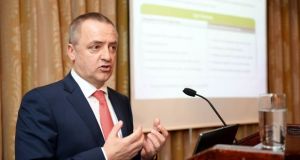 Agri-services group Origin Enterprises has spent between €10 million and €15 million in Brexit-related contingency planning, its chief executive said on Wednesday.

Tom O’Mahony said the group had built up stock because its suppliers had advanced their own plans and provided goods early. He added that these funds would ultimately have been spent throughout the year but were front-ended to guard against the impact of a no-deal Brexit.

Mr O’Mahony was speaking after Origin reported results that came in ahead of analysts estimates. Revenue at the group rose almost 20 per cent in the first half of its financial year.

Revenue for the six months to the end of January was €701.6 million, up from €586.9 million a year earlier, helped by the company’s acquisition of Brazil-based Fortgreen.

In Origin’s Ireland and UK business, operating profit more than doubled from €1.2 million to €2.8 million after revenue rose almost 15 per cent to €433.9 million.

Operating profit in continental Europe, meanwhile, dropped €300,000 to €600,000 while revenue rose 21.6 per cent to €147.9 million. Mr O’Mahony noted this is a less significant half of the year because spring cropping production kicks off “around now”.

On Brexit, Origin said the group secured additional storage over the winter period to prepare for any “short-term logistical disruption”. And while Mr O’Mahony found that “the uncertainty is still enormous”, he said farming in the UK, and particularly the cereal sector to which Origin is exposed, is “in great shape”. “Farming is not going to implode in the UK,” he added.

Looking ahead, Origin said “the autumn and winter cropping profile established to date provides a solid foundation for the seasonally more important second half”.

Liberum analyst Sophie Jourdier said the outlook “reads confidently” and the company reiterated its “buy” rating on the stock. Goodbody analysts Jason Mollins and Patrick Higgins agreed, adding that they consider the company to be “well positioned” for the second half of the year.

Origin’s net debt to earnings ratio stood at 2.57 at the end of the period but that is set to drop later in the year, Mr O’Mahony said.

“The reason it was higher was largely due to lower cash liquidity in continental Europe because [farmers] were slower selling their crop output,” he added.

Following from the expectation that figure is to fall, Mr O’Mahony said the company will pursue further acquisitions “at the right time” with a focus on Latin American and continental Europe.

The company’s existing investment in Latin America, through the Fortgreen acquisition, “underlines the group’s ambition to pursue meaningful geographical diversification and seasonality balance in attractive growth markets,” he said.

Headquartered in Dublin, Origin declared an interim dividend of 3.15 cent per share.