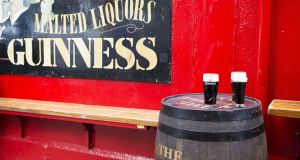 Younger US consumers are cutting back on alcohol consumption and eschewing beer as they count carbs. Photograph: iStock

That’s the message that the alcohol giant Diageo is trying to hammer home in the US as it seeks to boost its beer business, which is mainly Guinness, the 260-year-old Irish stout whose rich, dark colour wrongly suggests to some that it’s packed with calories.

That misapprehension is a stumbling block in a market where Americans – especially younger consumers – are cutting back on alcohol consumption and eschewing beer as they count carbs and try to improve their diets. Guinness packs about 125 calories per 12 ounces, just 15 more than Bud Light, the top-selling beer in the US

That’s a point Guinness wants to emphasise. The US beer industry is in the throes of a multi-year sales slump, but one of the standout performers during that time has been Michelob Ultra, an Anheuser-Busch Inbev brand with only 95 calories per bottle. Diageo says Guinness is in the same league and needs to do a better job of letting people know it.

“It’s very close to a light beer,” said Nuno Teles, president of Diageo Beer, a unit of the London-based conglomerate.

In the second half of 2018, Diageo’s beer business saw sales jump 13 per cent in the US, and the momentum has continued in the early part of this year, with sales of Guinness stout cans rising 16 per cent in the past 12 weeks, according to the company.

The brand, which had sales of $1 billion (€0.88 billion) in the US in 2017, according to Euromonitor International, is benefiting because it’s “premium, with craft credentials,” said Mr Teles.

“Overall, it’s a challenging market,” he said. “The secret is to find the right proposition.”

Guinness also got a boost after opening a brewery in Baltimore last year, marking the first time the company is making beer on US soil since 1954.

Classic Guinness is still produced in Ireland, but Diageo is using the new facility in part to conduct market research as it tries to figure out which new recipes resonate with Americans. The brewery has boosted the so-called brand awareness of Guinness in the US, Mr Teles said. Increased marketing spending has also helped.

The company has a tough road ahead of it. Americans drank less alcohol in 2018 for the third straight year, and the beer slump is the main culprit. Consumption of the classic American adult beverage is low among Generation Z consumers, who are just starting to enter drinking age.

According to a survey of Americans conducted by Bloomberg Businessweek and Morning Consult, only 8 per cent of Gen Z respondents listed beer as their favourite type of alcohol, well below the quarter of millennials who prefer beer over any other alcoholic drink. Nearly half of Gen Z consumers say they don’t like the taste of beer, while about 40 per cent in the 18-to-21 range said they don’t drink at all.

Besides focusing on calories, Diageo is also trying to reach the younger drinkers who don’t like to go out. Guinness is stocked at bars across the US, but as millennials increasingly opt to stay in, watching Netflix and ordering food, Diageo is trying to explain why its stout cans have that small plastic ball in them – the nitrogen is supposed to create the experience of having a draft in a bar.

“They don’t want to go out, but they want the same experiences,” Mr Teles said. – Bloomberg