Brexit may force Down distillery to delay whiskey launch 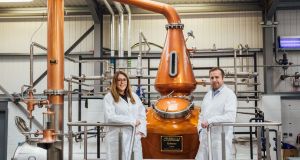 Rademon Estate Distillery, the producer of the award-winning Shortcross Gin, may be forced to delay the launch of its new single malt Irish whiskey because of Brexit.

The Co Down distillery had planned to release the first batch of its whiskey within the next couple of weeks but the husband and wife team behind it say the uncertainty surrounding Brexit has already created significant problems for food and drink producers like them in Northern Ireland.

David Boyd-Armstrong, who together with his wife, Fiona Boyd-Armstrong, set up the craft distillery (the first in the North) in 2012, said producers in the North are “incredibly frustrated” about the damage that Brexit has already wrought on the sector.

“We’ve all been kept in the dark about what’s going on. We’ve no idea what is going to happen to our export markets, our customers and suppliers are asking us what’s happening and we have to tell them we don’t know.

“We’re invested to grow our business, we’ve expanded our production capacity to meet growing demand for our Shortcross Gin and we are getting ready to launch our new single malt Irish whiskey, but we are potentially now going to have to delay that launch until we have a clearer picture about Brexit.

“We’re a small, agile business but everything about Brexit has been so last minute that it gives businesses like us no chance to plan ahead. It is incredibly frustrating but it is also very damaging for developing businesses in Northern Ireland,” Mr Boyd-Armstrong said.

He said many of the distillery’s main customers are in the EU and any potential changes to current tariffs or trading arrangements could have a significant effect on its operations.

“Have any of the locally elected representatives involved in the Brexit discussions, and that is really the DUP, thought about what Brexit will mean even in terms of paperwork for businesses in Northern Ireland? For us, for example, labelling is a massive issue – we have a significant supply chain across the UK, Ireland and Europe and worldwide – we need to be able to plan even just for labelling. Are we going to have to relabel all our products in two months’ or six months’ time?

“Brexit just isn’t a bump in the road for producers like us in Northern Ireland, it is a massive boulder and it is already stifling the economy.”

Mr Boyd-Armstrong said many food and drink producers in the North are now finding that some of their key suppliers are “holding off on making procurement decisions at this time”.

“The longer the uncertainty surrounding Brexit continues the more difficult it will become to keep reassuring suppliers and what this means is that some food and drink producers could lose business.

“We will launch our first single malt Irish whiskey, which we’re very excited about, but potentially not just when we planned to,” he said.

Separately, a new agri-food alliance in the North has said a no-deal Brexit would be “devastating” for the North.

“It would crush our farming base, destroying family businesses within weeks and would decimate investment leading to closures and job losses.

“Tariffs can be switched on and off within a few months but the impact on farming and food manufacturing would be far from short term.”