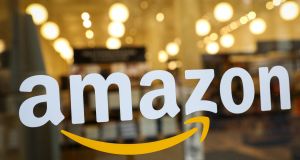 Amazon is one of the companies that Data Scape, which is backed by US and Irish investors, is suing.

A Dublin technology and patent company has launched a fresh swathe of US lawsuits against high-profile web and data giants, including the online retailer and media group Amazon and Dropbox, a cloud storage site.

Sandyford-based Data Scape, which is backed by US and Irish investors, is now engaged in a total of 15 cases where it is suing tech behemoths for allegedly breaching patents it owns for technology that allows data transfer and storage.

Data Scape bought the patents upon which it is basing its claims in recent years from Sony.

The first batch of cases were filed in various US courts in the days immediately after Christmas, when it targeted companies such as Apple, Dell and the music streaming site Spotify.

Others on the receiving end of lawsuits from Data Scape include German cloud computing company SAP; Japanese group Fujitsu; Nasdaq-listed Western Digital; Citrix, over its file-sharing service; and the music-streaming service Pandora.

In recent weeks, a further seven cases were filed. The Amazon case relates to allegations that its popular services, such as Kindle and Amazon prime, breach the Irish group’s patents. Similar cases are also being taken against Barracuda Networks, Teradata Operations, Box Inc, and F5 Networks.

The respondents in the cases have yet to file defences to the claims, and some or all of them may choose to fight the cases. Data Scape said this week it is currently holding talks with “a few” of them, but declined to identify which ones.

Data Scape is 49 per cent owned by an Irish arm of US hedge fund, Magnetar Capital, which manages assets worth $13 billion. The rest is split between Irish-linked, US-born tech investors Stephen McErlain, Richard Tashjian and Jerry Padian.

Data Scape shares its Dublin address, as well as some directors and investors, with tech intellectual property company Solas Oled. A managing director of Solas, Ciaran O’Gara, also appears to have an executive role at Data Scape.

Mr O’Gara said this week that Data Scape would “prefer not to litigate” the cases but is prepared to if it cannot reach agreement with the respondents.

Mr Padian said he met Mr O’Gara several years ago at a GAA match in the US, and that subsequently the idea was developed to found Data Scape.

He said he believed this State has the potential to become the “Switzerland of intellectual property”. The Government has previously tweaked laws to make the republic a more attractive location for tech IP.