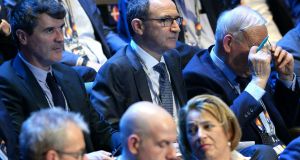 Martin O’Neill has rubbished suggestions that his standing amongst the Republic of Ireland players has been affected by him coming close to leaving for Stoke City.

Not even the most active social media influencers within the squad uttered their support during or after the episode, while former Ireland defender Richard Dunne highlighted amid the fallout a potential breakdown of trust in the dressing room.

O’Neill, having declined the vacancy at Stoke and finally signed the contract extension initially presented as an “agreement” three months ago, was keen to stress after Wednesday’s Uefa Nations League draw his delight at being still at the helm.

However, it is the presence of another previously secretive agreement with the Football Association of Ireland, one whereby he is free to talk to any clubs, that renders this pact at best tenuous.

When asked was he open to extending his tenure beyond this latest deal expiring at the end of Ireland’s involvement in Euro 2020, he said: “Listen, there are lots of things that could happen. I couldn’t foresee Friday morning, never mind anything else.”

Emphasising that his dalliance with Stoke did not amount to any unapproved straying, O’Neill suggested the fickle nature of management diminished the prospects of players taking umbrage. Still, it is difficult to square that rationale with the oft-trumpeted trait of spirit and solidarity emanating from the camp under his reign.

“Why would I speak to the players?” he argued. “I would say this about players; every single day they walk into their clubs they might expect a different manager. A manager’s tenure at club level is very short, and gets shorter as the time goes on.

Martin O'Neill gives his reaction to the Republic of Ireland's Nations League draw and addresses recent speculation about his future #RTEsoccer pic.twitter.com/cLC1SiDARB

“The players get used to that type of thing, but the main thing about the players here, the players want to play for Ireland – that’s the number one thing.

“They want to pull on the shirt. Just ask James McClean. It doesn’t matter who the coach or manager would be, but I think the players would be delighted that I’m staying on.”

Whether that tenancy lasts the duration of this contract remain to be seen. Ireland have a couple of friendlies confirmed, away to Turkey in March and France two months later, with another warm-up game in Dublin in June likely to be announced.

Then it is the Uefa Nations League group stage from September to November before the Euro 2020 qualifiers commence in March 2019.

“It’s not a boasting thing, but I’ve had numerous opportunities in my time here,” said O’Neill. “Each time I have stayed, so I don’t take those jobs lightly.

“I think I actually look at in the opposite way to you [the media] in that the fact that people do actually want your services might be a compliment to the particular job that I’ve done with the Republic of Ireland.”

O’Neill declined to elaborate on the mechanics of the Stoke City talks, batting it away “for another day”. Yet his words and body language on his first media engagement since the walloping by Denmark in November’s World Cup play-off gave credence to the notion of him being stung by the reaction to the play-off mauling.

“Some things get forgotten, like the great, great moments that we’ve had,” he contended. “We beat the world champions Germany, qualified for the Euros and got to the last 16.

“In the last campaign we were unbeaten away from home, and actually finished two places above where we should have in terms of ranking. I had to take all of those things into consideration and I did so. After reflection, I’m delighted to be here.”

Whatever O’Neill opted to let go during that downtime, his sparring with Tony O’Donoghue wasn’t erased. A feature in the latter stages of the campaign was the manager’s tetchy responses to questions from RTÉ’s football correspondent, particularly after disappointing results against Georgia and Denmark.

Once again the Derryman bluntly ended the interview but not before accusing O’Donoghue of launching a verbal attack on him.