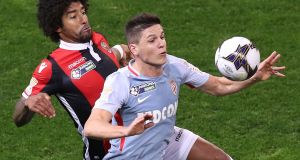 Southampton have agreed a fee of €22 million with Monaco for the Argentinian striker Guido Carrillo and are confident of completing a deal before the end of the transfer window.

The struggling Premier League club have been desperate to add to their forward ranks after a difficult first half to the campaign under Mauricio Pellegrino. The outlay on Carrillo would represent the release of the first tranche of money generated by Virgil van Dijk’s €86 million sale to Liverpool, with further reinforcements anticipated. There is strong interest in the Dutch winger Quincy Promes at Spartak Moscow who could cost a club record €35.5 million.

Carrillo, 26, has been used primarily off the bench by Monaco this season, with only two league starts, but has scored five goals for the Ligue 1 champions. Southampton had initially hoped to buy him for closer to €17 million, and had an offer rejected this week, but have moved to conclude the deal by striking a compromise with the need for forward recruits clear.

Charlie Austin is injured, Republic of Ireland striker Shane Long has scored once since February 2017 and the Italy international Manolo Gabbiadini has struggled badly after a bright start to his career in England last term.

The 6ft 2in Carrillo worked with Pellegrino at Estudiantes and has spent the past two and a half years in France. Once personal terms have been finalised, he will join a side winless in the top flight since November, and nestled awkwardly in the bottom three despite an encouraging draw with Tottenham Hotspur on Sunday. – Guardian service