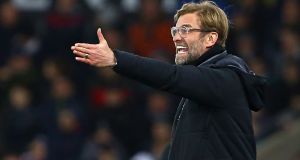 Jurgen Klopp expressed regret after reacting angrily to a Swansea supporter during Liverpool’s shock 1-0 defeat at the Liberty Stadium.

Liverpool almost rescued a point when Roberto Firmino’s header struck a post in stoppage time, but it was a miserable night for Klopp who was involved in an angry exchange of words with a Swansea fan in the second half.

“He was shouting at me all the time and I reacted once,” Liverpool manager Klopp said.

“I must remind myself I’m a human being and not just a professional manager who takes that all the time.

“They can say whatever they want, at one point I turned to him and said, ‘Please!’

“It was only one moment when I had enough, it wasn’t to do with the fact we were 1-0 down. I’m sure I am not the first manager who has had a problem with him there, he must be a season ticket holder.

“It was my fault as well. I should not react, but I didn’t say anything bad. I just showed I wasn’t happy about what he was saying.”

Liverpool lost valuable ground on second-placed Manchester United and Chelsea in third with a first defeat in 15 league games.

They are now six points behind United and three adrift of Chelsea.

“I’m more frustrated with the performance than the result and I’m angry because it was not a good game,” Klopp said.

“We lost the game in the first half. We didn’t do what we wanted to do.

“It hasn’t happened too often so I didn’t expect that and I was quite surprised.

“We had a chance right at the end, but if we had got a point it would still have been a bad game for us.

“The game was the opposite of what we wanted. That happens from time to time and it’s not that we threw it away.

“Swansea are fighting for their life and we’ve no problem with that. To win this game Swansea needed our help and they had it.”

Swansea stay bottom — albeit on goal difference from West Brom — but it is now only one defeat in six games since Carlos Carvalhal took charge last month.

The Portuguese has instilled real belief that Swansea can escape relegation and he believes their condition is looking a lot rosier after this shock win.

“We are breathing,” Carvalhal said. “We are not out of the hospital, but we are out of emergency and we can accept visits.

“We still have a lot of work to do but we have confidence.”

His analogies did not stop there.

“When we studied Liverpool, I told my players they are a really strong team and I compared them to a Formula One car,” Carvalhal said.

“But it is difficult for a Formula One car in 4pm London traffic to hit top speed.

“I said we must make it difficult for them and put them in London traffic.

“We did make some mistakes, but we blocked the dynamic of Liverpool and deserved this victory.”