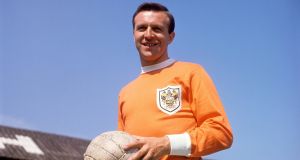 World Cup winner, ex-England captain and Blackpool great Jimmy Armfield has died at the age of 82.

Armfield, who played 627 matches in 17 years for his only club and was part of Alf Ramsey’s victorious squad in 1966, was diagnosed with cancer for a second time last year.

“Blackpool Football Club is deeply saddened to learn of the passing of its record appearance holder and vice-president Jimmy Armfield at the age of 82,” said a statement from the club.

“Our heartfelt condolences go out to Jimmy’s wife Anne, his two sons, Duncan and John, and the rest of the Armfield family at this time.”

Armfield captained Blackpool for more than 10 of his 17 years at the club and was capped 43 times for England, with 15 of those occasions as skipper.

He was one of two Blackpool players along with Alan Ball named in England’s 1966 World Cup winning squad, although injury denied him an appearance at the tournament due to injury.

Only players who were on the pitch in the final received winners’ medal but what was rectified 43 years later when Armfield eventually received his medal.

Armfield, made a CBE in 2009 for services to the Lancashire community, had stints in management with Bolton and Leeds before moving into broadcasting where he spent more than 30 years working for the BBC.

He was inducted into Blackpool’s Hall of Fame in 2006 and Bloomfield Road’s newly-constructed South Stand was named in his honour in 2010 with a statue commissioned by the Blackpool Supporters’ Association erected outside the ground the following year.

In a statement to the Blackpool Gazette Armfield’s family said: “After a long and courageous battle, our beloved husband, father, grandfather and father-in-law Jimmy Armfield, has passed away peacefully surrounded by his immediate family.

“At this time we are still in shock as we begin the grieving process. We know Jimmy was a public figure, but the family respectfully ask for privacy at this time.

“We have many wonderful messages of love and support, for which we are grateful, and moved by all the kind words.

“We would also like to thank all the magnificent and dedicated NHS staff who have kept Jimmy, and the family, as well as possible over the ten years of his illness.

“During the last few days Trinity Hospice in Blackpool made a big difference to Jimmy as he slipped away, pain free at last.

“Jimmy had two great loves, first and foremost was his family, to which he was devoted and loved dearly. The other was football, especially Blackpool, England and his colleagues at the PFA.

“Once again, the family extends its thanks as we try to come to terms in a world without Jimmy.”

1 Six Nations: Ireland are contenders but England still the team to beat
2 Limerick roar from behind to sink Tipp and start league in style
3 GAA officials and referees brace themselves as new rules kick in, and this time it's for real
4 Mike Catt hopes to have Irish backs purring in Six Nations
5 Agony as Leitrim are denied victory at the death by Derry
Real news has value SUBSCRIBE