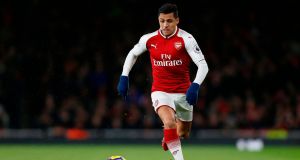 José Mourinho has claimed to being in the dark about Manchester United’s bid to sign Alexis Sánchez, though the manager is calm regarding the situation.

Mourinho is hopeful the Chilean can be acquired in the current window, with Henrikh Mkhitaryan potentially moving in the opposite direction. While the Armenian is not in the squad for Saturday’s trip to Burnley due to the uncertainty over his future, Mourinho stated he is not involved in negotiations.

“I don’t know, my involvement in the situation is just to say the reasons why I would like to have the player and no more than that, I’m out,” he said.

Asked if Sánchez’s arrival hinged on Arsenal signing Mkhitarayn, Mourinho said: “I don’t know. Sometimes people thinks transfers involve a lot the managers in the negotiations, I think it depends on the profile of the club, the way we establish our jobs.

“In my case when it goes to the table of negotiations I like to be out, I am out and I will just calmly waiting for news, no more than that. I will speak with you if one day we sign him, I can speak with you about him and what he can bring to our team. He’s an Arsenal player, he’s not my player, there’s no point in me speaking about something that may or may not happen.

“Clearly everybody knows that we are there and especially when Arsenal manager [Arsene Wenger]speaks so clearly like he did there is no point in trying to hide or deny. But it is not done at all, so in this moment Mkhitaryan is our player, Sánchez’s an Arsenal player and with a match tomorrow I want to switch off and focus on the most important thing, which is the match.”

The manager believes Luke Shaw, who has started the last four league matches, is displaying form that makes him among finest left-backs currently playing.

“He is physically much better, mentally much stronger, tactically understanding the game much better,” said the Portuguese. “I can say that in this moment I don’t see many left-backs better than this Luke Shaw.” – Guardian service