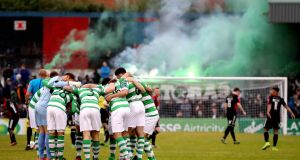 Shamrock Rovers have their team huddle ahead of the Airtricity League Premier Division game against Bohemians at Dalymount Park in May 2017. Photograph: Ryan Byrne/Inpho

The Dublin derby between Bohemians and Shamrock Rovers will kick-off the live coverage of the Airtricity League season on RTÉ2 on Friday, February 16th.

The match at Dalymount Park will begin at 7.30pm to facilitate live coverage, with the broadcaster set to announce further live games from the opening weeks of the Premier Division season in due course.

Rovers won last year’s derby at Dalymount Park, goals from Brandon Miele and Trevor Clarke earning them a 2-0 win in front of a crowd of 3,600.

The great rivals played twice in the league at Tallaght Stadium last season, winning a game each. Rovers enjoyed a 2-1 win in March, but Bohs will go into the opening night with bragging rights after a 2-1 win in July.