Thomas Delaney: Dane with Irish name has eyes only for Russia 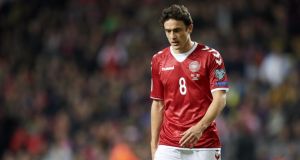 “The Republic of Ireland.”

“Sure if we keep Christian Eriksen quiet we’ll beat them, who else do they have?”

Cue much googling of who plays for the Danish national team.

Although he may sound like he comes from somewhere in the south east (a relation of John Delaney, perhaps?), this Thomas Delaney is as Danish as one of those swirly pastries you have with your coffee, that thing they call “hygge” or that Carlsberg ad featuring Mads Mikkelsen which seems to be on the television every 30 seconds these days.

His Irish name comes from his paternal great grandfather who moved to the United States during the famine, settling just outside New York before some of the family made the move to Scandinavia. “It goes back to the 18th century,” Delaney said in 2011 when he was in Dublin with FC Copenhagen for their Champions League qualifier against Shamrock Rovers. “I don’t think many Danish people realise that Delaney is an Irish name,” he added and, while he could have represented the United States due to his father’s duel citizenship, the curly-haired midfielder spent all his life in Denmark, came through the ranks at FC Copenhagen and is very much of a favourite son of the Danish people.

And he’s one of Denmark’s most important players, to boot.

The central midfielder, who plies his trade with Werder Bremen in the Bundesliga, is very much of the box-to-box mode. He runs and runs, scores goals, defends, tackles and wins headers. According to Soren Hanghoj Kristensen of Danish newspaper BT, he is one of the most popular players in red and white.

“He is the type of midfielder who is very rare in Danish football,” Kristensen says. “We always talk about box-to-box midfielders but we never seem to have any. Even though he is not one of the tallest players on the team (6’1”) he is one of the best headerers of the ball due to his timing and his jump which makes him very dangerous in both boxes.”

Indeed Delaney’s ability in the air was on full show during Denmark’s qualifying campaign when he headed home his first senior international goal in a 4-0 win over Poland on September 1st before netting a hat-trick - two of which were headers - in a 4-1 win away to Armenia three days later.

Since making the switch from Copenhagen to Bremen at the beginning of the year he’s started nearly every game and netted five goals along the way, as well as captaining the side on a number of occasions. His form has fueled much talk of a move to the Premier League in England, particularly because he is the sort of physical midfielder so many clubs are crying out for. A potential move to Brighton didn’t work out during the summer but, according to Kristensen, he is expected to head for England this coming off-season. It would be the latest move in a career which took time to get going after a full debut for Copenhagen at the age of just 17 saw him hotly-tipped to be one of Denmark’s great young stars before his career stalled somewhat. However, in the last couple of years he’s gone from strength to strength.

“It’s all gone very fast for Delaney,” Kristensen says. “He was playing for Copenhagen all his life before moving to Werder Bremen but, even though he was named captain at a young age (just 22), he wasn’t even assured of a spot in the starting team. But the fact that he was named captain so young says a lot about him. Then last year he completely exploded in the Danish league and was the best player in the Superliga whereas just two years ago he was not even a regular.”

With Champions League appearances for Copenhagen under his belt, including taking on the likes of Juventus, Real Madrid, Bayer Leverkusen and Leicester City, the 26-year-old’s potential has always been there but only recently is he showing it week in, week out.

“With the national team we’ve known Åge Hareide (Denmark manager) has always wanted to integrate him in the starting lineup. He’s had a lot of chances but it wasn’t before September that he really broke through when he scored four goals in two matches against Poland and Armenia. That was his final big, big breakthrough with the national team and what we’ve all been waiting for for the last year, year and a half.”

Just in time to face Ireland, then.

And, on top of the form of Delaney, coupled with the presence of Eriksen, there is a real positive feeling around this Danish team for the first time in a long time. While the qualifying campaign began with half empty stadiums and a certain apathy around the team brought on by the fact that they have only qualified for two major tournaments in the last 13 years - crashing out in the group stages of both Euro 2012 and the 2010 World Cup - the enthusiasm is back for the Danish people with the Ireland game selling out in no time and confidence high that they will be going to Russia next year.

Whether that prediction is correct remains to be seen but, if it was to come true, there would at least be a number eight with a very Irish name playing in Russia next summer.

1 Leinster get the opponents nobody wanted
2 Liverpool have a shot at genuine legacy season
3 Shane Lowry agreeing to play in Saudi Arabia is an unfortunate choice
4 Stephen Scullion completes marathon journey to Tokyo
5 Corofin combine total football with dark arts for three-in-a-row
Real news has value SUBSCRIBE
Crossword Get access to over 6,000 interactive crosswords