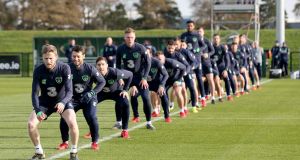 The Ireland squad in training on Wednesday ahead of the World Cup playoffs with Denmark. Photo: Oisin Keniry/Inpho

Harry Arter believes Ireland have to be careful to look beyond Christian Eriksen for threats in Copenhagen on Saturday night but the Bournemouth midfielder is wary too about the Tottenham midfielder having seen plenty of him up close in action over the last few seasons.

“I’ve played against him a few times,” said Arter, “and it’s obvious for everyone to see that he is a world class player but I feel that they have players that people are not so aware of who are, maybe not completely up to his standard, but still top class players. You can’t just prepare for or focus on just one individual. We have to stick to our game-plan and if we do that then I’m sure that we will get a positive result.”

The Irish squad’s preparations for the game are progressing well enough with Stephen Ward returning to training on Wednesday and Jeff Hendrick doing some light work by himself after a scan intended to help the FAI’s medical staff assess the seriousness of a glute injury brought fairly positive news.

The midfielder’s availability would be a boost ahead of the away leg in which, however many other concerns there will be, the collective effort to contain Eriksen is bound to be a priority.

Arter has, perhaps, seen how it should and shouldn’t be done in Premier League meetings between the two clubs, most obviously last season when Bournemouth held the top flight’s top scorers to a goalless draw at home only to be beaten 4-0 in the return game. In the latter, Eriksen played a key role as the Londoners totally outgunned their opponents. Spurs managed 14 attempts on target to just one in reply and the former Ajax star provided an assist from a corner.

“He has great awareness, a great football brain,” says Arter. “He is one of those players who will always find space somehow. We’re going to have to try and get tight as possible because he’s the sort of player you can’t give too much time on the ball to.

“These players who are world class, they always find space, pockets that you wonder ‘how they get into it?’. It’s good going into a game knowing his strengths, though, that whenever he gets the ball, you’ve got to try to get to him a quickly as you possibly can, try not to let him turn on the ball and see the whole pitch, don’t stand off him.”

“We set up playing 4-4-2 that day (in April, at White hart Lane) and as I say… these players, they find space, even when you are really compact. Probably the one criticism of us that day is that our shape was really poor, being in a 4-4-2 is not an excuse because you can still be compact that way but we were very loose and you cannot give players of Eriksen’s quality, of Tottenham’s quality, so much space.”

In the earlier game, he says, Bournemouth did not give them that space. Arter and his team mates did not look to man mark the Dane but they did work very hard to deprive him of the sort of time or space on which he thrives. “We put a lot of pressure on him and we got a positive result that day; the idea will be similar when it comes to planning for him individually...for us to put as much pressure on him as possible.”

Arter, of course, is not sure yet that what, if any, part he will actually be asked to play in the game but his performance in Cardiff, after the disappointment of Tbilisi, certainly suggests he will be a starter.

“On a personal note,” he says, “it was vital (to get back into the team for the win in Wales) because my last game previous to that was Georgia and it obviously wasn’t a productive game for me or for the team. We didn’t lose in Georgia but it was personally really disappointing so I was thankful to the manager for giving me the opportunity in a massive game and I was just pleased that I was part of a positive result.”

Whether he is paired with Glenn Whelan again this time seems far less certain but the 27-year-old is adamant they can work well together despite having also started sluggishly in Vienna where the Dubliner then limped off a half an hour in.

“The Austria game didn’t start well but it could have easily changed for the positive in the way it did with Glenn on,” he says when asked whether the pair might simply not be best suited to partnering each other for some reason. We’ve played together in friendlies and played well together.

“The Georgia game was just a disappointment all round for the team. I don’t feel that you could really pinpoint me and Glenn as the reason why the game didn’t go as well as we would have hope. Of course, individually we take responsibility for not playing well but as a partnership, I would hope, we are more than capable of playing with each other. We’re different sorts of players, which is great, and I have no doubt that if we were both to play in Denmark there would be no problem.”

It would most likely give Arter a little more license to contribute to the attacking side of things, something he showed he could do to good effect with his step over for the goal in Wales, something he briefly describes as an assist before correcting himself with a a smile.

“I tried to say to Jeff (Hendrick, whose cross was turned home by James McClean) I was having the assist but he wouldn’t have it.”

1 Connell losing touch with club championship is real tragedy of Normal People
2 Rob Howley opens up about sister’s death and gambling issues
3 Ger Loughnane and the spark that lit Clare's hurling revolution
4 Ghosts and goalposts: The soul of street football in Dublin’s Gloucester Diamond
5 Champions League final likely to be moved from Istanbul
Real news has value SUBSCRIBE
Crossword Get access to over 6,000 interactive crosswords