David Moyes: ‘I think I want to be more aggressive now’ 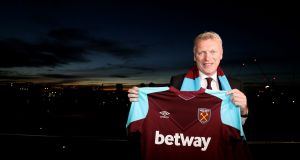 David Moyes was warned his new players he will be taking a hard line approach at West Ham. Photograph: Steven Paston/PA

David Moyes struck a positive and defiant tone as he insisted that West Ham United had taken a “good gamble” by appointing him and warned his new players not to cry about how much he will make them run in training.

After claiming that the squad he has inherited from Slaven Bilic is too strong to be in a relegation battle, West Ham’s new manager said that improving the team’s fitness is high on his agenda. Bilic was sacked on Monday amid concerns over his training methods, which left many players feeling unprepared for the physicality of the Premier League, and Moyes said that he wants to rediscover his old aggression after finishing bottom of the Premier League with Sunderland last season.

The 54-year-old Scot, who held a double training session before being unveiled at the London Stadium on Wednesday, is an unpopular choice with many supporters as Bilic’s replacement on an initial six-month contract. However Moyes said that David Gold and David Sullivan had hired a good manager. He denied that a sexist comment he made to a female BBC reporter in March came up in his interview with Karren Brady, even though the club’s vice-chair was critical of his conduct at the time, and instead focused on statistics showing that Bilic’s team had made the fewest sprints and covered the second-lowest distance in the division this season.

“I think I want to be more aggressive now,” Moyes said. “When I was younger it was: ‘This is how it is, take it or leave it.’ As you get older you mellow in different ways. Probably in this job, I am going back to being David Moyes at Preston when players were probably crying at the work, or at Everton in the early days as well. If the players were maybe thinking the work had not been hard enough or they maybe had not done enough, I hope they won’t cry if we work them harder. I don’t want them to say: ‘This is too much.’ Responsibility has to be taken by the players.”

Discipline was a problem under Bilic, who was seen as a soft touch by his players and the board, and Moyes was clear that anyone who does not work hard enough will be dropped. With West Ham in 18th place after mustering two wins from their first 11 games, the Scot intends to ruffle a few feathers. “I am in a bit of a rush and I will say: ‘If you don’t like it, sorry,’” Moyes said. “We might need to upset a few to get where we need to go.”

Moyes, who hopes to add Alan Irvine and Stuart Pearce to his staff, has struggled since leaving Everton for Manchester United in 2013. But he defended his record at Real Sociedad and dismissed his year at Sunderland as a mistake, saying that he did not do enough due diligence. Moyes is likely to earn a two-year deal if West Ham are sufficiently impressed at the end of the season. “I think it’s a good gamble and I think if I was a West Ham chairman I would certainly consider David Moyes as manager, that’s for sure,” he said. “It has been an up and down period but I feel the good times are still to come.

“The due diligence I’ve done here is the knowledge that I’m here for a short period to do the job quickly. We will only have one transfer window, which is in a month. If there’s anything I need I will need to see it quickly. It maybe needs a tweak here and there.”

Moyes, who asked the advice of a predecessor, Sam Allardyce, before taking the job, was asked whether West Ham are in a relegation fight. “No, not at all,” he said. “It’s not totally easy to identify the XI, but we’re talking about a strong squad here.”

West Ham have conceded 23 goals, the most in the league. Moyes knows that he has to tighten the defence, although he is conscious that Allardyce’s pragmatic outlook did not sit well with West Ham’s fans. “In our position the only thing we should be talking about is trying to win,” he said.

Moyes, whose first game is at Watford on Sunday week, also called for unity from the London Stadium crowd. “We don’t want it to be a tough place to play for the home players,” he said. “Things will go wrong, there is no doubt about that. Things just can’t go swimmingly good – it’s just not possible in football. When things are going wrong, we need them to stick with us.”