Northern Ireland to tap into winning mindset for Switzerland clash

Michael O’Neill: ‘We respect Switzerland but will do everything to get to World Cup finals’ 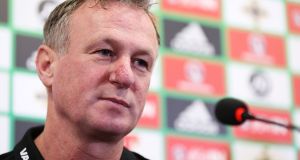 Northern Ireland manager Michael O’Neill: “I see an assurance in the players and a self-belief that has grown over a period of three to four years.” Photograph: Brian Lawless/PA Wire

Michael O’Neill has prepared another motivational video for Northern Ireland’s World Cup play-off, but believes painful memories of how international football used to be for his remarkable overachievers will provide the spur against Switzerland. Having travelled so far to stand 180 minutes from Russia, O’Neill insists there is no going back.

Four years ago Northern Ireland lost to Turkey during a miserable run of two wins in 31 internationals, a sequence that predated O’Neill but continued under him until transformation arrived en route to last summer’s European Championship. Now Windsor Park will stage one of the biggest nights in its history, with Northern Ireland aiming to qualify for back-to-back tournaments for the first time. They are underdogs against opponents ranked 11th in the world – a role that suits O’Neill’s side fine – but they have acquired a taste for the good times and a determination to move on from the bad.

“The players deserve enormous credit because they had to turn it around themselves,” said O’Neill, who will give Steven Davis his 100th appearance for Northern Ireland on Thursday. “You can get into a habit of being poor and losing and it takes guts to change that mindset.

“The players did that and that is something we hang on to. The good thing we have now is that when you’ve been through the experiences that Jonny [Evans] and Davo [Davis] have been through you don’t want to go back.

“That’s the only motivation you need to maintain this level, for us to progress to the finals, to get to the last 16 [of Euro 2016] and to now being in a World Cup play-off. The players don’t want to let it go. That’s the motivation the players have. They have been through it and experienced a lot of good and bad.

“The one thing I would say to them is don’t fear the situation; embrace it and make sure there are no regrets. We know the prize is massive and what it means to everyone in Northern Ireland, but our focus is on how we get through the two games. I see an assurance in the players and a self-belief that has grown over a period of three to four years and put them in this position.”

The feeling around Switzerland is they should not be in this position at all. Vladimir Petkovic’s side collected 27 points in qualifying, the country’s record total in a campaign and more than five of the nine European group winners. They boasted a 100 per cent record until losing 2-0 to Portugal in the final qualifier and missed out on automatic qualification on goal difference as a consequence. O’Neill hopes there is a psychological hangover to exploit; Xherdan Shaqiri, Stoke City’s Swiss forward, has described Northern Ireland as “the most difficult opponent that any of the four seeded nations could have been drawn against”.

O’Neill said: “To win nine games and miss out on automatic qualification is not a pleasant situation to be in as a coach or players. Their last game against Portugal was almost like a play-off and now they find themselves in a play-off with us. They have a lot of tournament experience in their squad and got to the last 16 of the Euros and the last World Cup. We respect them but we will do everything within our power to get to the finals.”

Because of a draconian insistence that yellow cards collected in the group stage remain active in the play-offs, Northern Ireland have eight players at risk of missing Sunday’s return in Basel through suspension. Switzerland have seven, although few of those on the danger list are expected to start in Belfast. O’Neill’s entire probable midfield will be walking a disciplinary tightrope along with the key defenders Evans and Chris Brunt.

“I don’t envisage over two legs there being a big margin; it will be a tight play-off tie,” the Northern Ireland manager said. “We want something to take to Basel to give us an opportunity in the second leg – ideally that’s a lead. There are little things to be wary of. The significance of an away goal [after extra time] that you don’t normally have in international football can change the dynamic of the tie. But we can’t get too bogged down. There are eight countries left in Europe and we’re the smallest one going into this situation. We’ve got everything to play for.”