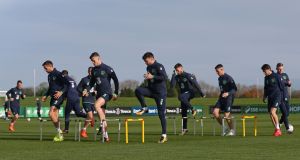 The Republic of Ireland squad during a training session at the FAI National Training Centre, Abbotstown. Ireland take on Denmark in the first leg of their World Cup playoff in Copenhagen this Saturday. Photo: Niall Carson/PA Wire

Jeff Hendrick missed training on Tuesday morning at Abbotstown with the 25-year-old sent for a scan on an injury that still appears to be posing some threat to his participation in Saturday’s World cup play-off against Denmark in Copenhagen.

Martin O’Neill had said on Monday that the Burnley midfielder was struggling but the manager had indicated that he expected to be able to walk through a few scenarios in training with the player today. Instead, Hendrick was absent while his club-mate Stephen Ward was there but rested as he looks to recover from a longer-standing knee problem.

“I’ve really no news on Jeff,” said Roy Keane after training. “Obviously he didn’t train today. Because it’s Tuesday I’m personally not over-worried, if it came to Thursday and he still wasn’t training then I’d be more concerned. But he didn’t train today. Wardy didn’t train. Obviously Wardy is looking after his knee a bit but it’s only Tuesday, we’ll see how it goes over the next few days.”

The rest of the squad did train with both Daryl Murphy and John O’Shea taking part and Keane said that he feels Ireland are in good shape generally going into the game. He acknowledged that dealing with Christian Eriksen is an issue but the preparations are, he suggested, going well with the players energised by the prospect of making it to a World Cup.

“We have a lot of experienced players in our group and we’ve got a vastly experienced manager so you hope that will all bring something. You can over-analyse it until the cows come home; it’s a game of football we’ve got to play over there and try to get the right result, whatever that might be, we’ll have to see, it depends on the night, on the performance.

“You have huge respect for the other team but you’ve got to get that balance right, you can’t overestimate your opposition and underestimate yourselves. They’ve got good players and we obviously have to get close to them, we spoke last time about Bale, you have to be aggressive in possession and out of possession. If you give these guys time on the ball they are going to hurt you; that’s why they are really good players.

“We got close to Bale in Dublin and made it hard for him to play that night and we have to do the same with Eriksen but not just Eriksen, you can’t get bogged down with one player, they have some really good players in their team. But as much as we are going to have to stop them they are also going to have to stop us.

“It’s a hard game to call, that’s why everyone is intrigued by it. It’s going to be a huge battle. The two games will be huge, mentally, physically, emotionally but that’s what we are in the game for.

With Ireland hoping to qualify for a first World Cup since 2002, one that certainly sticks in the mind of Keane himself, the Corkman says the whole camp are fully set on going to Russia.

“We’re looking forward to it. People asked before Wales whether we would have taken a play-off game but we are delighted with it. We are ready and the players will give everything for their country, that’s all that you can ask.

“I was fortunate to play in 94 and my first World Cup watching was 82, it was fantastic. It would be great for the country and the supporters. It’s nice for the lads to have that enthusiasm for getting to a World Cup.