World Cup 2018: The state of play around the globe 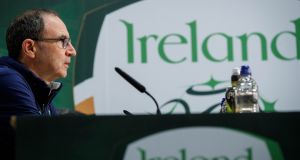 Martin O’Neill’s Ireland can secure a place at the World Cup for the first time since 2002 with playoff victory over Denmark. Photograph: Ryan Byrne/Inpho

The jigsaw is nearly complete. In just over a week we will know the identity of the 32 teams taking part at next year’s World Cup.

23 teams have already guaranteed their place in Russia next summer, and during this week’s international break the final nine places will be filled.

Among the sides looking to secure their ticket to the biggest party of 2018 are Ireland, who take on Denmark over two legs as they bid to qualify for the tournament for the first time since 2002.

Martin O’Neill’s men travel to Copenhagen on Saturday, before the Danes come to Dublin next Tuesday in what promises to be a rousing finale to a long qualification campaign.

There are three other playoff clashes across Europe - with Northern Ireland facing Switzerland, Italy playing Sweden and Croatia taking on Greece.

But while things are reaching a head on home soil , there is still plenty to be settled around the globe - with places up for grabs for teams across Fifa’s five other confederations.

It’s the calm before the storm - and things are about to get lively. Here is a look at the qualification picture around the world as we head into a crunch week of fixtures.

State of play: Three places are still up for grabs in Africa heading into the final rounds of fixtures. Tunisia are in pole position in Group A and need just a point against bottom-place Libya to guarantee qualification ahead of DR Congo. In Group C Ivory Coast trail Morocco by a point but welcome them to Abidjan on Saturday knowing a win will see them qualify. Meanwhile Senegal need two points from a double-header with South Africa to top Group D.

State of play: A two-legged playoff between Australia and Honduras will decide the final side to qualify from the Asian and CONCACAF (North America, Central America and Carribbean) federations. Australia qualified for the playoff after scraping past Syria in an Asian playoff, while Honduras earned their place after finishing fourth - a point ahead of the USA.

State of play: The final acts of a qualification campaign which began for Ireland on September 5th 2016, and was kept alive with a rousing win over Wales last month - a result which ensured Martin O’Neill’s men a playoff place. The draw was kind to Ireland - with Denmark more favourable opponents than Italy or Crotia. Northern Ireland are one of the first nations in action on Thursday night as they welcome Switzerland to Windsor Park. Michael O’Neill’s men will be relieved not to be facing Portugal - who leapfrogged the Swiss in their final Group B fixture. Elsewhere four-time winners Italy face Sweden, while Crotia take on Greece. All playoffs will be played over two-legs, with the away goals rule in place.

State of play: New Zealand and Peru are the two teams competing for the final place at next year’s tournament - with the identity of the other 31 sides to be known by the time of their second leg clash next Thursday. The All Whites finished top of their Oceania pool - ahead of Fiji and New Caledonia - before beating the Soloman Islands in a playoff. Peru meanwhile missed out on automatic qualification by a point, but reached the playoff on goal difference ahead of Chile. New Zealand last featured at a World Cup in 2010, while Peru are bidding for their first appearance since Spain 1982.