Arter hopeful Jeff Hendrick will be fit for Denmark 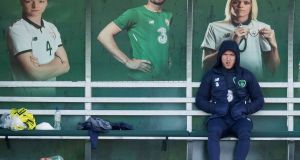 Ireland’s Jeff Hendrick sat out training for a third straight day ahead of the World Cup playoff encounter with Denmark. Photo: Oisin Keniry/Inpho

Harry Arter is optimistic that Republic of Ireland team-mates Jeff Hendrick and Stephen Ward will be fit for Saturday’s World Cup play-off in Denmark.

Question marks hang over the Burnley pair, with midfielder Hendrick battling a glute injury and defender Ward a knee concern.

Hendrick did not take part in Wednesday’s training session in Dublin but was expected to undertake a fitness session later and hopes are rising that he will be able to start against the Danes.

Bournemouth midfielder Arter said: “Obviously fingers crossed, they are two massive players for us, and I am sure they will be doing everything they can to be fit.”

Ward sat out Tuesday’s session, with assistant manager Roy Keane saying the defender was “just looking after his knee a little bit.”

Martin O’Neill’s men face Denmark in Copenhagen this weekend before a return leg at the Aviva Stadium on Tuesday.

Jonathan Walters and James McCarthy are among the players already ruled out through injury, and David Meyler is suspended for the first leg.

Arter added: “It’s disappointing that the manager can’t select everyone he’s got in the squad at the minute but whoever comes in and plays will be determined and they will know their role.

“I’m sure they’ll give their all to try and get another result — the same as in Wales.”

A total of 10 players are on yellow cards and in danger of missing the second leg, including Arter, who said it was not on his mind.

“It’s disappointing that you carry cards over, maybe in the future they might change that and keep it for group stages, but for me personally, and I’m sure I speak for all the lads who are on bookings, you have to just get on with it.

Midfielder Callum O’Dowda, 22, was the youngest player to start a competitive game under manager Martin O’Neill when he played against Moldova during the qualifying campaign.

“To go to the World Cup as well that would be the icing on the cake for me — the pinnacle,” he said.

“These two games are like two cup finals, really.”