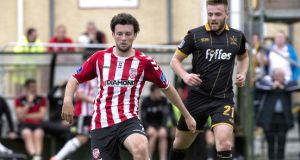 Cork City have confirmed the signing of midfielder Barry McNamee who joins the league champions after a strong season with Derry, the club where had been a central figure since making his breakthrough in 2011.

“I am thrilled to get it done,” said the 25 year-old. “It was a tough season at Derry with everything that happened, so I took my time to think about everything, and I decided that this was the right move for me.

“I got ten goals in the league this season, which was my highest return so far and I am hoping to push on again next year. I want to score more and set up more. I want to be part of the team that has just won the league and I want to win more trophies.”

For John Caulfield the attraction of player who can both score and create goals in significant numbers is obvious and the manager is enthusiastic about his latest signing.

“Barry is a fantastic, creative player,” he said. “He is a perfect player to come into our team; he is energetic, has lots of experience and is coming into the prime of his career.”

City captain Alan Bennett, meanwhile, has been named as the Airtricity League/Soccer Writers’ Association of Ireland for October with the veteran central defender recognised for his part in Cork’s run-in during which John Caulfield’s side kept three clean sheets in four outings and clinched the Premier Division title.

The award comes on the day that the veteran defender announced he had signed a new deal with Cork to play on for one more season.

Bennett, who was also part of the City side that won the title in 2005, played in all three of the games that City did not concede but was rested for the game at against St Pat’s at Richmond Park where Cork led 2-0 but ultimately lost 4-2.

Since the end of the month he has also gone on to help the club to the FAI Cup with the 34 year-old producing another strong performance at the Aviva stadium.

That game does not count towards this award, however, which Bennett picks up ahead of Billy Dennehy of St Patrick’s and his former Cork City team mate Chiedozie Ogbene, now of Limerick, who finished second and third in the voting respectively.

George Kruis leaves the door open as he prepares to depart Saracens 06:35
TV View: Not every day a Tesco delivery disrupts a Bundesliga broadcast 06:30
Ken Early: Liverpool fans, Bamber Gascoigne and a close shave in Istanbul 06:00
As news gets better, can the pull of The Field be resisted? 06:00
From TB to polio: GAA is no stranger to disease disruptions 05:00

1 Sideline Cut: Vignette shows why Bird is the true shark in The Last Dance
2 Ken Early: Liverpool fans, Bamber Gascoigne and a close shave in Istanbul
3 George Kruis leaves the door open as he prepares to depart Saracens
4 O’Leary says himself and Kingdom star Galvin were the best of enemies
5 As news gets better, can the pull of The Field be resisted?
Real news has value SUBSCRIBE