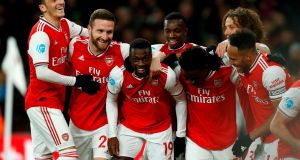 As the last few seconds of this largely forgettable game played out, as Arsenal knocked the ball around with abandon and Newcastle chased them without conviction, a strange and discomfiting sensation seemed to descend on the Emirates.

You might call it, for want of a better word, satisfaction. Not happiness, as such: Arsenal don’t really do happiness. But the soft and sleepy contentment of a game well won, an afternoon without qualms or catastrophic injuries or late drama or existential angst: this was the unfamiliar part.

You could legitimately point out that things have gotten pretty rough for Arsenal fans when the yardstick of a successful afternoon is one not spent screaming. But as ever in these faltering early days of the Mikel Arteta era, you have to take your little triumphs where you can find them.

This was one: a victory secured with class and swagger, gilded by those two late strikes from Mesut Özil and Alexandre Lacazette that elevated this from a functional win to a rout. A victory with caveats too, to be sure: how Bernd Leno managed to emerge from the game with a clean sheet is a question that will flummox the statisticians of the future.

Indeed, for all their dominance of possession Arsenal occasionally did their level best to make Newcastle look like a functional attacking side. Had Steve Bruce’s side been a little more clinical, particularly in the first 20 minutes when terms were still being negotiated, it might have been a different colour of game entirely. By the time they meaningfully threatened again, around an hour in, Arsenal were already 2-0 up through Pierre-Emerick Aubameyang and Nicolas Pepe, and largely safe.

Pepe was a real treat to watch. It was his precise cross that set up Aubameyang’s opening goal, and when he found the net himself two minutes later, it felt like fitting reward for a pleasingly decisive performance: sharp, unpredictable, productive.

There are plenty of Arsenal fans who had already written him off after a disappointing half-season: in and out of the side, weighed down by his £72 million price tag and freighted with the pressure of adapting to a new league and a dysfunctional team. But there’s a proper player in there, and Arteta seems to recognise as much.

As for Newcastle, there will be more than a few eyebrows raised at the manner of their late collapse, one in which their hard-won reputation for shape and solidity seemed to evaporate before our eyes. New wing backs Valentino Lazaro and Danny Rose began well but looked dangerously exposed as the game went on. Bruce has staked his job and Newcastle’s survival on their ability to make things tough for the opposition. This, a meek and tired capitulation after a break of 12 days, did not bode well.

And yet it was Newcastle who began this game by far the stronger team: parrying Arsenal’s thrusts with ease, passing their way through the press, making the most of their infrequent spells of possession. With Miguel Almiron barracking his way up the right wing and Allan Saint-Maximin weaving his usual sorcery on the left, the early chances fell to the visitors.

Lazaro had a shot blocked in the fifth minute. Sean Longstaff’s volley following an immaculately-worked set-piece was almost deflected past a scrambling Leno. Joelinton stabbed the ball just wide from six yards.

But Arsenal finished the first half well, portending the three-minute burst near the start of the second where they put the game to bed. Eddie Nketiah, unexpectedly given the job of leading the line, began to find little pockets of space on the edge of the area. A curling shot near the end of the first half and a volley against the crossbar early in the second served notice of Arsenal’s growing threat.

Suitably relaxed, Arsenal loosened their ties and started playing a few shots. Pepe struck next, tucking home from close range after an outrageous bit of skill from Bukayo Saka on the left. And though Newcastle briefly threatened to make the game interesting – Ciaran Clark missing from unmissable range, Saint-Maximin clattering the post – it was Arsenal who provided the final flourish.

In the 90th minute, Lacazette squared for Özil. Perhaps through force of habit, the German’s shot was more of a pass, a delicate lay-off that Dubravka could have trapped with his foot. Instead, as he tried to smother the greasy ball, it bobbled out of his grasp and into the net.

Lacazette brought the curtain down, smashing home Pepe’s cross after a lovely through ball from Joe Willock. Four-nil, then, and if there was any lingering surprise at full-time, it was not merely that Arsenal could still win at all, but that they could win like this.

Under Unai Emery and now Arteta, Arsenal have almost forgotten how to win these games: this was their first home win against a team ranked lower than them since October, if you can believe it. And so it may only have been three points. But in the final reckoning, this may well be the game when Arsenal started to feel like a big club again. – Guardian

1 Man City to investigate Kyle Walker over lockdown sex party
2 Ken Early: Mick McCarthy II was no blockbuster, more of a flop
3 Ken Early on Mick McCarthy II; racing will endure even the harshest criticisms
4 Horse racing is in the doghouse, but remains a magnificent triviality
5 Cigala caught in the crash as cycling’s Zwift League series heats up
Real news has value SUBSCRIBE