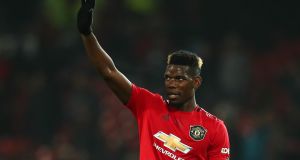 Ole Gunnar Solskjær was unable to confirm Paul Pogba will play for Manchester United again when asked to state it unequivocally.

Pogba is still recovering from an ankle problem in what is proving an injury-blighted season that has limited him to eight appearances.

He last featured as a half-time replacement in the 4-1 win against Newcastle at Old Trafford on St Stephen’s Day. That was six weeks ago despite Solskjær previously stating the France playmaker would miss about a month.

Pogba is unsettled at United and is expected to leave in the summer. Solskjær, when asked to say conclusively that the 26-year-old will play for United again this term, said: “Well of course I’d like to say that as soon as he gets fit he’ll be good enough to play and I’m sure Paul’s desperate to play for us again.”

Solskjær also refused to characterise Pogba’s bad luck with injury as being “disastrous” for the player and club. “You’re not going to get that headline from me. As a player the last thing you want is to be is injured and not being able to contribute to your team.

“It’s a difficult period in your career [being injured] but it is part and parcel of being a player – so I’m not going to give you a headline that his season has been such and such.”

Solskjær suggested he has only minimum contact with Pogba, who was not in Marbella last week during the squad’s winter break. “He’s been in and around here [training ground]. And of course I okay’d him doing his recovery somewhere else.”

Pressed on why Pogba was not in Spain, Solskjær said: “I don’t have to justify every decision. Paul’s still on his recovery programme, taking off his cast, so when he’s back with us we’ll integrate him. [He’ll be back] hopefully soon. He’s started running on the treadmill so he’s getting closer – it’s been a long haul so hopefully we can see him back soon.

“Paul’s an important player for us but we learn so much about the others as well. Some of the players have really stepped up and taken on responsibility and shown what they can be and what they are for Man United. It’s unfortunate if you get one of your best players injured of course, but that’s just part of it, part of being here. I can’t feel sorry for myself because we’ve had all these injuries – we’re building a squad that can cope with this.”

Scott McTominay and Marcus Rashford are two other front-line players also undergoing rehabilitation from respective injuries. Odion Ighalo was signed in January as short-term cover for Rashford yet the manager indicated the striker could land a permanent deal if he performs well.

“It’s a loan but when you’re in the door if you impress it gives you a chance,” Solskjær said. “That’s exactly the same for everyone who signs – if permanent or a loan: if you impress as a player, person, if you can help this group improve, there’s a chance we’ll look at extending things. And it’s up to us as well that he’ll want to stay if we wanted him.”

Of the winter break Solskjær said: “It was more about getting the group together again – the first week to refresh, then we had our first training together for five months. That’s a quite a long time. There were [also] a couple of things we haven’t been happy with [regarding team play] and we had to sort.”