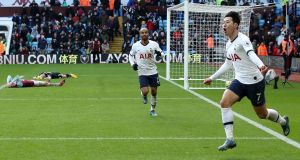 Fifth place might be important this year and Tottenham have just climbed back above Sheffield United to claim it, though it took a last gasp winner from Son Heung-Min in the fourth minute of added time to overcome a plucky and resilient Aston Villa side.

The home side scored first and came back to level the game in the second half after the visitors had taken an interval lead, but by the end of the match they were becoming dangerously reliant on Pepe Reina’s reflexes as the goalkeeper produced a string of late saves to keep the scores level. Hugo Lloris made some good saves too, it was that kind of match, though Villa thought they had done enough to earn a point until a momentary lapse of concentration by Bjorn Engels right at the death. He let the ball run under his foot to leave Son a clear run on goal. Son had been one of the players keeping Reina busy in the later stages but he was not going to miss an opportunity like this, and he ran on to slip the ball beyond Reina as Engels and his drained teammates fell to the ground in despair.

It was a cruel way to end a mistake-ridden but hugely entertaining game. On this evidence Villa should probably be higher in the table than they are at the moment, though they could do with a reliable goalscorer and quite a bit more luck. It turned out to be quite an afternoon for Toby Alderweireld, who in addition to being given a torrid time by Jack Grealish on Tottenham’s right, scored at both ends in the first half. Villa took the lead after just five minutes of an enjoyably hectic first half that featured plenty of goalmouth chances for both sides, when Anwar El Ghazi turned Ben Davies on Villa’s right wing and sent over a cross that Alderweireld could only turn past his own goalkeeper under pressure from Mbwana Samatta.

Villa were on top in the first quarter, with Grealish narrowly missing with one of his trademark right-foot curlers from the edge of the area, and El Ghazi having a shot saved by Hugo Lloris after Grealish had skipped away from Alderweireld to provide the cross. The Villa captain did the right thing on that occasion, setting up a teammate with a pass that deserved to produce a goal, though when he broke through again a few minutes later he would have been better taking on a shot himself rather than attempting to find a colleague in a crowded area.

Spurs could easily have gone two goals down at that point midway through the first half, yet a couple of minutes later they were level, Alderweireld coming up with a splendid shot on the turn when a corner came his way via a deflection off Danny Drinkwater to beat Reina with a rising drive. Once back in the game Spurs gradually stepped up the pressure, even if Lloris did have difficulty dealing with a succession of Villa corners around the half hour mark. Dele Alli wasted a good opportunity after staying onside from a throw in, missing the target when one on one with Reina, before VAR made its presence felt just before the interval, confirming that Engels had stopped a Steven Bergwijn shot with his chest and not his arm. The Holte End was quite happy with that decision not to award a penalty, though when Bergwijn popped up again in the closing second of the first half, VAR overruling Martin Atkinson’s original decision not to penalise Engels’ sliding challenge was greeted with chants of “It’s not football any more”. The VAR interpretation was probably correct, Engels ended up playing the man and hardly touched the ball, and though Reina reached Son’s penalty after standing tall during the Korean’s stuttering run-up, he was unable to prevent the player tucking away the rebound.

A feature of the first half had been the number of occasions Drinkwater gave the ball away to allow Spurs the chance to launch quick counters, and the second half began in exactly the same way. Bergwijn dispossessed Drinkwater on half way to power his way into the penalty area, and only a well timed intervention by Frédéric Guilbert prevented Spurs going further ahead. Instead it was Villa who found a second wind, levelling the scores just before the hour when Engels climbed above Alderweireld to head past Lloris from a Grealish corner.

Reina kept out shots from Bergwijn and Son as the game continued to see-saw, and was quick to deal with a Serge Aurier overlap after the impressive Bergwijn had played the full-back behind the Villa defence. Son would bring another fingertip save from Reina as the game entered its closing stages, though the visitors’ best chance of clinching victory in normal time was when a mistake by Ezri Konsa Ngoyo left Alli in the clear. The England forward was not decisive enough, allowing the defender time to recover, yet Villa relief was premature. An almost identical mistake from Engels, when there was no time left to do anything about it, proved their undoing. – Guardian

Jack Grealish needs to show that his remorse is real this time 12:13
Tottenham give 550 non-playing staff a 20 per cent pay cut 12:14
Sky Sports customers save on bills; rule changes could change rugby utterly 07:25
Uefa meet to re-evaluate hopes of finishing current season 06:48
Gerry Thornley: Changes to tackle laws could transform rugby by time of next World Cup 07:18