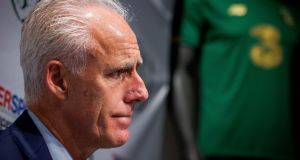 Republic of Ireland manager Mick McCarthy will stick with his more experienced players for their play-off against Slovakia. Photograph: Ryan Byrne/Inpho

Troy Parrott’s failure to go out on loan from Tottenham in the most recent transfer window has all but ended his chances of featuring in Ireland’s Euro 2020 play-off game against Slovakia next month. Ireland manager Mick McCarthy feels the teenager will not now get the first team football required to put him in contention.

McCarthy made it clear that he will be looking to the players who have done well for the team through the group stage games when he selects his side for Bratislava and admitted to having been slightly disappointed that the young Dubliner had missed out on a move that might have given him the opportunity to get more competitive game time under his belt.

“Not really,” said the Ireland manager when asked, at the launch of the Elverys InterSport FAI Summer Schools, if he was happy to see Parrot sign a new deal at Tottenham. “I wish he’d gone to Charlton and played games on loan.

“It’s great for him financially, he’s got a new contract but I wish he was playing football somewhere. He couldn’t go out before because of his age and I understand that but if he’s not playing competitive football he has very little chance of being in the squad.”

McCarthy suggested that Parrott isn’t the only young player who is likely to miss out as things stand with the manager mentioning Adam Idah and Aaron Connolly - but acknowledging that neither has cemented places in their club first teams after impressive initial impacts.

“Continuity is important for me,” he said. “If the lads who have been playing are fit then you are not going to get too much change.”

Pressed on the case for the likes of Jayson Molumby, who has been doing particularly well on loan at Millwall, he suggested that he and a couple of others who have been playing regularly in the second tier are ones for the future given the importance of next month.

“They are all doing well but don’t think for one minute because they are doing well in the Championship that they are going to come in against Slovakia because it’s not the case. But it’s great for Stephen (Kenny)”

David McGoldrick, he said, should be “flying” by the time the Slovakia comes around having returned from injury. While he will assess the cases for including Shane Long and James McCarthy based on their club form closer to March 16th when he is scheduled to name his squad for the game.