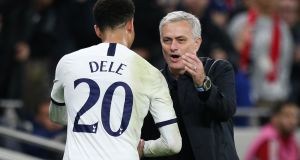 José Mourinho says he has spoken to Dele Alli about the recent online controversy in which the Tottenham Hotspur midfielder became embroiled and that it was an “easy conversation”.

Alli is facing a possible Football Association charge over a video he filmed in an airport departure lounge in which he appeared to mock an unsuspecting Asian man and claimed the man might be infected with the coronavirus. The FA has written to Alli and asked for his observations.

“Of course I spoke with him about that,” Mourinho said, before Sunday’s game at Aston Villa.

“But for me it was a quite easy conversation, because he was very sorry about that thing ... a mistake. It was never his intention to hurt, it was never his intention to offend. He immediately regretted and realised it was a young guy mistake, a young generation mistake. It was not a case of me being unhappy and him not understanding why I was unhappy. He regrets and that’s the best he can show. And I think to apologise is remarkable.”

Shortly after uploading his video to Snapchat, Alli removed it and posted a video on the Chinese social media network Weibo in which he admitted his attempt at humour was misguided and expressed contrition.

“It wasn’t funny and I realised that immediately and took it down,” the 23-year-old said. “I let myself down and the club.”

This season the Manchester City midfielder Bernardo Silva was handed a one-match ban, fined £50,000 and ordered to undertake an awareness course after a tweet sent to Benjamin Mendy was deemed to have constituted an “aggravated breach” of the FA’s rules on social media behaviour because it appeared to reference the French left-back’s race. The Portuguese appeared to compare his teammate to the caricature of a black boy found on the packaging of a Spanish confectionary brand.

Mourinho, asked whether he was worried Alli could be banned , suggested whatever will be, will be.

“I’m not the FA,” he said. “I’m his manager. His friend. I have to act as an educator and the best way to do it is immediately his reaction. Regret and apologise. So, game over.”

With games coming thick and fast against Villa, RB Leipzig and Chelsea, Mourinho revealed that Giovani Lo Celso and Ben Davies were available after injuries and that Érik Lamela would be assessed before Sunday’s match.