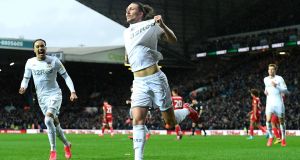 Luke Ayling scored against his former side as Leeds eked out a gritty 1-0 win over Bristol City to go three points clear in the Championship automatic-promotion spots.

The defender lashed home early on but despite dominating the encounter, the hosts could not add to their tally.

Leeds would have been buoyed by leaders West Brom dropping points earlier in the day.

The Baggies were held by Nottingham Forest — and the win for Marcelo Bielsa’s side trimmed the gap between the pair to four points, with Leeds three ahead of third-placed Fulham.

Leeds made an electric start and skipper Liam Cooper nodded wide from a corner after just two minutes.

Bristol City were struggling to live with Leeds at times, but their patterns of good build-up play were without any end product — a familiar theme for Leeds this season.

The opener arrived in the 15th minute and it came after a mad scramble in the box.

Leeds were repelled on a number of occasions by excellent Bristol City defending but their resistance was finally broken when the ball fell kindly to Ayling.

Despite being surrounded by a mass of City defenders, Ayling smashed the ball past Bentley.

Leeds thought they had doubled their lead just a couple of minutes after, when Patrick Bamford tapped in after a shot had bounced kindly for him after striking the crossbar.

Unfortunately, the flag was raised immediately as Bamford was offside.

Undeterred, Bamford then flashed a shot at goal after a superb control and spin.

City started brightly after the restart and were appealing for a penalty after Ayling blocked a shot in the area.

Referee Tim Robinson was uninterested despite the vocal appeals from City boss Lee Johnson and his coaching staff.

Jack Harrison was catching the eye in particular and he whipped in a dangerous centre that only just evaded the onrushing Costa.

Chances were coming thick and fast for the hosts going into the final quarter of the game and when Costa laid it on a plate for Bamford he looked destined to make it 2-0.

Somehow though, he saw his shot from a few yards kept out by the agile Bentley.

A minute later Bentley made an even more scarcely-believable save.

Costa latched onto a long pass and rounded Bentley only for the City keeper to somehow stick out a hand and divert it behind for a corner.

Leeds were bossing the match and chances continued to come and go for the Whites.

The impressive Harrison, who was a menace down the left flank all afternoon, thought he was the one to finally seal the second goal but his speculative effort came back off the crossbar.

Substitute Jean-Kevin Augustin, with almost the last kick of the game, placed a shot just wide but the hosts’ profligacy was unpunished as they held on.

Earlier, Nottingham Forest’s Matty Cash scored an added-time equaliser to snatch a 2-2 draw at West Brom as the Baggies’ lead at the top of the Sky Bet Championship was cut to four points.

The hosts had twice led through Callum Robinson and a Tobias Figueiredo own goal but were denied a fourth successive win by Kyle Bartley’s own goal and Cash’s late intervention.

Leeds’ ictory brought the added bonus of opening up a three-point cushion over third-placed Fulham, who suffered a surprise 3-0 defeat at home to bottom club Barnsley.

Former Cottager Cauley Woodrow opened the scoring with a 24th-minute penalty awarded after Marek Rodak brought down Jacob Brown, with the goalkeeper fortunate not to be sent off.

Brown and Woodrow scored after the break to secure a first win in five league matches.

Brentford moved above Forest into fourth on goal difference after Ethan Pinnock’s 17th-minute goal cancelled out Lukas Jutkiewicz’s tap-in in a 1-1 draw at Birmingham.

Blackburn moved within three points of the play-offs with a 2-0 win over Charlton thanks to first-half goals from John Buckley and Tosin Adarabioyo.

Rovers overtook Cardiff, who twice came from behind to deny struggling Wigan a vital victory in a 2-2 draw.

Kieffer Moore scored twice for Latics, his second from the spot in first-half added time, after Josh Murphy’s half-volley had cancelled out his opener but Marlon Pack’s deflected shot 10 minutes after the break earned the hosts a point.

QPR were 4-2 winners at home to Stoke having recovered from 2-0 down.

Bright Osayi-Samuel and Ilias Chair scored after the break following a crazy first half saw four goals scored in 11 minutes.

Stoke went 2-0 up through Sam Clucas and Tyrese Campbell only for Jordan Hugill and Ebere Eze to level things up before the break.

Derby were held to a 1-1 draw at home to Huddersfield after Tom Lawrence’s 20-yard shot was cancelled out by Harry Toffolo’s equaliser.

Shaun Hutchinson’s 78th-minute header was enough to secure a 1-0 win for Millwall at Preston but there was more misery for floundering Sheffield Wednesday, who have not won once since Christmas.

Ovie Ejaria’s brilliant through-ball teed up Reading team-mate Yakou Meite for the opener and then Osaze Urhoghide was sent off for a second bookable offence after bringing down Ejaria — the Owls’ fifth red card of the season.

Ryan Tunnicliffe’s first goal of the season was enough for Luton to win 1-0 at Middlesbrough.