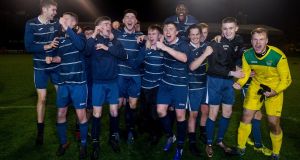 Dublin City University won the Collingwood Cup for the first time in the college’s history on Wednesday evening as Declan Roche’s side beat Ulster University 4-1 in a penalty shoot out after a close-fought final at Dalymount Park.

DCU, which is celebrating its 40th year, had kicked their tournament off by beating UCD on spot kicks and they held their nerve under pressure again here as the northerners fluffed their chances of a first title since 2008.

Maynooth University Town striker Jack O’Connor wrapped things up for the Dubliners after having gone closest to scoring what would have been the only goal of the game itself when, 42 minutes in, his effort forced Owen McConville to clear off the line.

UU improved as the game wore on but struggled to create clear-cut chances and with DCU unable to make the decisive breakthrough, extra time slipped by without a goal.

In the end, it came down to the penalties with David Mugalu and Craig Taylor trading successful conversions. Bray Wanderers defender Tristan Noack-Hofmann then put DCU ahead and McConville blasted over.

When Seán McCarthy then converted and Ronan Wilson also missed, it came down to O’Connor, a key figure in the college’s first ever Harding Cup success a few years back as a fresher, to put the victory beyond down which he coolly did.

1 Gerry Thornley: Home and away Six Nations could be its ruination
2 Aviva 10-year ticket holders seek clarity over payment
3 Coming fourth in the Olympics didn’t change this fearless quartet, time did
4 Darcy says enforced break could end up being a positive for Dublin
5 Eddie Dunbar stays in saddle as he eyes return to grand stage
Real news has value SUBSCRIBE
Crossword Get access to over 6,000 interactive crosswords