David McGoldrick so exceptional his goal drought can be forgiven 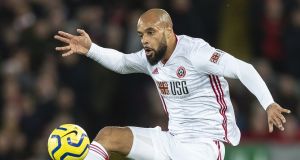 Of all the special relationships in the Premier League, the one between Sheffield United and David McGoldrick may just be the most beautiful. The club has, of course, been a delight in many regards this season, sweeping into the top flight with no airs and plenty of grace, defying the expectations of all those hollering experts who thought the Blades were still managed by Neil Warnock.

Chris Wilder has expanded the minds not only of people too highbrow to know what goes on in the nether leagues, but also of busy coaches who appreciate creative thinking. Overlapping centre-backs is an innovation that will catch on. But it is McGoldrick’s extraordinary role for Sheffield United that has really raised a smile this season. For who cannot love a striker who is a strong contender to be his club’s player of the season despite not scoring a single goal?

McGoldrick inspires something close to love at Bramall Lane: you only have to see the way he is cheered off the pitch after another goalless performance to know that. Or listen to Wilder, who said in advance of tonight’s match with West Ham that he would continue to pick McGoldrick this season regardless of his 0 per cent conversion rate from 35 shots.

Which is not to say that a blank shooting striker is another crafty tactical invention by Wilder. Merely that McGoldrick is so exceptional that all the other nifty things he does make not hitting the net forgivable. His movement is canny, his technique exquisite, his moxie inspirational. His ball control is magnetic and he is as likely to dupe a defender with a clever pass as he is to blindside a midfielder with a precision challenge. Only three Sheffield United players have won more tackles than him this season. Many of their moves start with him and practically all go through him at some point. He is to the Blades what Roberto Firmino is to Liverpool. Minus the goals.

He used to score, of course. He struck 15 for United to help them to promotion last season but it was mainly his other contributions that earned him the player of the year award. He has not scored for the club since two against Hull in April but, even though Wilder spent about £37 million (€43 million) on three forwards last summer, the manager’s first choice is still the player he signed for free in 2018 after Ipswich let McGoldrick go.

McGoldrick has come painfully close to a top-flight goal in his 17 games. Against Tottenham in November he even put the ball in the net, only for VAR to perpetrate what could well be its biggest crime against sport this season, disallowing McGoldrick’s goal on the grounds of a hairline offside against John Lundstram. Three weeks later against Wolves he had several chances but finished tamely, allowing Rui Patrício to save each time. When he was substituted in the closing minutes, Blades fans gave him an ovation. But it was clear that the goal drought was beginning to gnaw. Wilder needed to lend his own voice to those of the fans.

“I had five minutes with David in the dressing room, away from everyone else, and told him how key he is for us,” Wilder said of the 31-year-old afterwards. “He wants to get one [a goal] , of course he does. But we play better with David in the team, make no mistake about that.”

Four days before Christmas it looked as if a red-and-white-hued dream would come true. After pouncing on a loose header by Adam Webster, McGoldrick skipped past Brighton’s goalkeeper, Mat Ryan, to leave himself with an open goal. The travelling fans had the perfect view and leapt to their feet in anticipation of sweet deliverance. McGoldrick rolled his shot into the side netting.

There was silence, as if people needed VAR, Twitter or some other illustrious gimcrack to confirm what they had just witnessed. And then the realisation that yes, he had missed. In an instant hundreds of onlookers turned into characters from a painting by Edvard Munch. But then came the singing from United fans in praise of McGoldrick. Seldom, if ever, has a misfiring forward inspired such devotion.

On the same day as it happened, Miguel Almirón scored his first goal for Newcastle almost a year after joining the club. And four days later Alireza Jahanbakhsh scored his first for Brighton almost one and a half years after signing from AZ Alkmaar. Both those phenomena triggered eruptions of joy. But those goals came from players whose quality many fans had begun to doubt. No one who has watched McGoldrick questions his worth.

The goodwill he has generated is waiting to explode into roars. A bit like the ones released by Republic of Ireland fans in September when McGoldrick struck his first international goal on his 11th appearance. That was loud. But you get the feeling there will be a sonic boom when McGoldrick finally opens his Premier League account for Sheffield United.