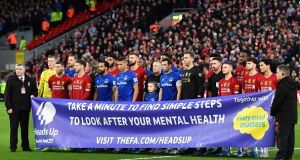 Everton and Liverpool players pose with a mental health banner before their FA Cup third round match at Anfield. Photograph: Getty Images

The seven UK betting companies with exclusive rights to screen FA Cup matches have offered to cancel the exclusivity and allow the Football Association to show games itself following sustained criticism.

The move comes after the FA opened talks over withdrawing from the controversial arrangement. It held discussions with IMG, the marketing giant which bought the Cup rights then struck deals with seven UK betting companies: Bet365, Betfair, William Hill, Coral, Ladbrokes, Unibet and Paddy Power.

In a statement on behalf of the companies Brigid Simmonds, chairman of the Betting and Gaming Council, said: “Our members did not seek exclusivity for the rights to screen FA cup games. They are therefore happy for IMG to offer the rights to screen these games to the Football Association or another appropriate body so that the games can be viewed for free by the public with immediate effect.”

Given the FA’s stance on not accepting any sponsorships from betting sites, it had explored withdrawing from the deals, which were agreed in early 2017 before that decision was taken, amid a storm of protest.

From the 2021-22 season, the FA had said that its new broadcasting deal allowed it to show FA Cup matches on its own website to a UK audience, so the UK betting companies would no longer have the matches exclusively anyway.

Ministers had earlier warned the FA that its government funding could be cut unless it ditched the deal that allows gambling companies to show live Cup games on their websites to people who open betting accounts, although that was considered very unlikely because government money paid via Sport England supports coaching and grassroots participation.

MPs from all parties lined up on Thursday to condemn the FA’s commercial tie-up with seven UK gambling companies after an urgent question tabled by the Labour MP Carolyn Harris, who branded the deal “shameful”.

“I’ve been very clear that the government has asked the FA to look at all avenues to review this element of their broadcasting agreement,” said Nigel Adams, a junior minister at the Department for Digital, Culture, Media and Sport.

He said he had summoned the FA for a meeting next week and would “see what opportunities there are to rescind this part of the deal”.

The former Conservative leader Iain Duncan Smith repeated his call, made in Thursday’s Guardian, for the government to review the funding it provides to the FA unless football’s governing body scraps the deal. “That will very much be on my agenda,” said Adams.

Audience numbers for the third-round matches shown on gambling websites are not publicly available as only the betting companies have the data, but they are thought to be relatively small, given the matches available are those not picked by broadcasters for a wider audience, and not kicking off at 3pm.

MPs lined up to express concern about gambling’s hold on football and to criticise the FA for signing a deal that allowed betting companies to show 32 FA Cup games, compared with two on free-to-air TV, to customers who opened an account or placed a bet.

The discussion saw widespread support from all parties for reform of the Gambling Act passed in 2005 under Tony Blair’s Labour government, which liberalised regulation on the industry.

The Conservative manifesto committed the government to a review of what it called “analogue legislation in a digital age” and Labour has also called for the Act to be replaced. – Guardian