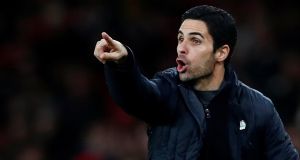 Mikel Arteta: “I’m expecting big things from the players I have at the moment, the players that are recovering from injuries.” Photograph: Eddie Keogh/Reuters

Mikel Arteta does not expect Arsenal to do “big things” in the January transfer window and says he would rather focus on what his current players can bring than obsess over high-profile additions.

Arsenal remain light in certain areas, particularly central defence, and Arteta is open to addressing those deficiencies. However the chances of sizeable fees being paid out are slim and the head coach pointed out several squad members – such as Héctor Bellerín and Dani Ceballos – would soon be ready to contribute again after injury.

“I’m expecting big things from the players I have at the moment, the players that are recovering from injuries. That’s the biggest expectation from my side. If we can find something to help us go through the season in a more balanced way in certain areas, and is helpful, we’ll look at the options.

“We always have to be looking because obviously we have some bad injuries for players who are going to be out for a long time. We have to see if we can find options there.”

Outgoing business this month will not include the sale of Pierre-Emerick Aubameyang, with the club captain using his programme notes before Monday’s win over Leeds to stress his commitment in the face of rumours he is unsettled. Arteta wants to keep Aubameyang for the long term but discussions over a new contract to replace the forward’s current deal, which expires in 2021, are yet to begin.

“I was very pleased to read those comments,” Arteta said. “He knows exactly what I think about him and obviously he’s a massive player for us. But at the moment we’re in the middle of the season and we haven’t discussed anything further on that at the club.

“My intention is to keep Auba, obviously, because I know that if we keep Auba with us, we’re going to be stronger and closer to winning football matches. That’s the only thing.”

Asked specifically whether he expected Aubameyang to stay beyond next year Arteta said: “I don’t know, we haven’t discussed that. But I’m confident that he’s very happy here because that’s what he said in the media.”

Arsenal will look to loan out the youngsters Emile Smith Rowe and Tyreece John-Jules this month, while Eddie Nketiah is in line for a new loan move after g a lack of playing time while at Leeds. Arteta is not expecting bigger-name departures, saying there is “nothing on the table” and predicting transfers may not happen until the now-traditional end-of-month flurry.

Selhurst Park is the venue for Arteta’s fifth game in charge on Saturday. When Crystal Palace visited Arsenal in November, Granit Xhaka fell out spectacularly with the home support and Roy Hodgson’s side battled back to draw from 2-0 down. However Arteta believes the squad’s mood is far more positive now.

“The spirit is up, the level of confidence is good and they seem in a good place,” he said.