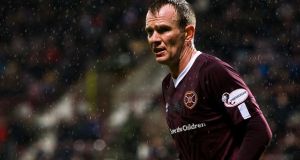 On Tuesday morning his exit was confirmed via a short statement on the club’s website: “Glenn Whelan has today left Heart of Midlothian Football Club by mutual agreement.

“The Republic of Ireland midfielder made 17 appearances during his four-month spell in Gorgie. The club wishes Glenn well in the future.”

Whelan signed for Hearts as a free agent last summer, and after 17 appearances he is back on the market. With Ireland’s Euro 2020 semi-final play-off semi-final against Slovakia in March, he’ll be keen to find a new club as soon as possible.

Hearts are bottom of the Scottish Premiership with only 13 points from 21 games. The 35 year-old had fallen out of favour with new manager Daniel Stendel, who replaced Craig Levein in December.

Stendel recently criticised the former Aston Villa and Stoke midfielder, questioning his leadership qualities: “I can say he is a good type. He wants to take the responsibility but I have seen only three games. Do you have the feeling he is a leader in this group? It’s not Glenn’s fault – but a real leader in the centre of the pitch? Sorry. Maybe I missed it. Michael Smith tries to take responsibility on the pitch.

“Before I came here, they signed some players who have experience and are the right age to take the responsibility but maybe they are not fit at the moment or they cannot handle the situation at the moment.”

1 Bayern Munich complete formalities with rout over Chelsea
2 Rory McIlroy puts integrity ahead of glory in US PGA second round
3 Lionel Messi waves his magic wand again to guide Barça past Napoli
4 Sporting Cathedrals: Semple Stadium, the very centre of the hurling universe
5 Andy Farrell admits Ireland net may need to be spread wide in the autumn
Real news has value SUBSCRIBE
Crossword Get access to over 6,000 interactive crosswords