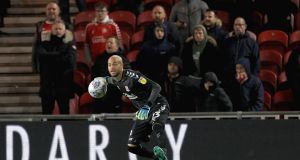 Darren Randolph may not move to West Ham as soon as anticipated due to a thigh injury. Photo: Mark Fletcher/MI News/NurPhoto via Getty Images

Darren Randolph’s £4m move to West Ham has been delayed so that further checks can be done on a thigh injury that has kept the Middlesbrough goalkeeper out in recent weeks.

West Ham still anticipate making Randolph their first signing of the January transfer window but the Republic of Ireland international is yet to pass a medical and the deal is on hold for the time being.

While the problem is not thought to be serious enough to stop the transfer going through this month, West Ham are treading with caution as they seek cover for Lukasz Fabianski.

Randolph, who left West Ham for Middlesbrough in 2017, has not played since November 24th and the transfer has not progressed as smoothly as anticipated despite the clubs reaching an agreement for the 32-year-old to return to east London this week. The player, who has established himself as one of the best goalkeepers in the Championship, could have to return to Middlesbrough for further rehabilitation.

However, there is a strong hope on both sides of the negotiating table that the deal will still go ahead. Randolph has a good overall fitness record at Middlesbrough, having made 106 league appearances for the Riverside club, and West Ham have not pulled the plug on the transfer.

Randolph has made it clear he favours a reunion with West Ham, who are keen to sign a new No 2 goalkeeper. They suffered when Fabianski was out with a hip injury earlier this season with the Pole’s replacement, Roberto Jimenez, failing to impress. Roberto has fallen below David Martin in the pecking order and is up for sale.

West Ham’s attempts to bolster their midfield by signing Benfica’s Gedson Fernandes on an 18-month loan with an option to buy have stalled. David Moyes, the manager, also holds a strong interest in Stoke’s Joe Allen, though an agreement over a fee for the Wales midfielder is some way off. Stoke want around £12m for Allen, but West Ham aim to negotiate a lower price. – Guardian