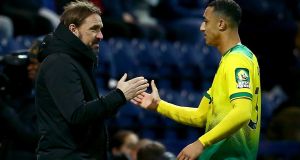 A Premier League debut and an FA Cup hat-trick in the space of four days – safe to say, Adam Idah is having a very, very happy new year. As his Norwich City manager Daniel Farke conceded after the 18-year-old’s treble against Preston North End on Saturday, “it will be a bit difficult to keep him a secret now”.

Farke had planned on sending the Cork teenager out on loan to a lower division club for the rest of the season, just to get some first-team football under his belt, but he’s now ruling out that idea. “Maybe I send Teemu Pukki out on loan instead,” he said with a grin, in reference to the club’s leading scorer.

Idah, who was given a four-year professional contract by Norwich last summer having joined from Cork club College Corinthians in 2017, made his senior debut in the League Cup back in August, but it wasn’t until New Year’s Day that he got his first taste of Premier League action when he came on as a substitute against Crystal Palace.

Injuries to three of the club’s strikers – Pukki, Josip Drmic and Dennis Srbeny – led to Farke starting Idah against Preston and he responded by opening the scoring after just two minutes. He then lobbed Connor Ripley from 35 yards after the Preston goalkeeper had kicked the ball straight to him, before completing his hat-trick on the hour by converting a penalty he had earned himself after Ripley took him down.

“It’s the greatest day of my career so far and a great way to start the year,” he said. “I’m over the moon to get a hat-trick and even to start the game was unbelievable. I have been working hard in training every day to get that opportunity and I am delighted to take it really.

“You need the belief and to be brave and when you get a chance in the team you have to take it. That is what football is about really – taking your chances. I will keep working and training even harder and if I get another chance in the side I will aim to take it.”

Idah is the fourth Republic of Ireland teenage forward to play in the Premier League this season, after Aaron Connolly (Brighton), Troy Parrott (Spurs) and Michael Obafemi (Southampton), and, inevitably, there’ll now be some pressure on Mick McCarthy to call him up from Stephen Kenny’s under-21 squad for March’s Euro 2020 playoff semi-final against Slovakia.

Appearing as a pundit on BT Sport on Saturday evening, McCarthy responded to presenter (and Norwich fan) Jake Humphrey saying he’d been pressuring him to give Idah his first senior international cap.

“He might have just got himself one, never mind you getting him one,” said McCarthy. “He’s scored a hat-trick today, and he’s playing in a real competitive game. It’s not under-21s, under-23s, it’s an FA Cup tie against a good Preston team.”