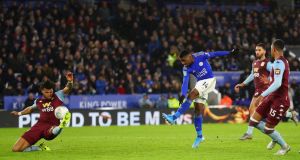 Brendan Rodgers warned that his evolving side would not get anywhere without learning how to suffer. Aston Villa put them to the test here, as they defied the form book and a spate of injuries to inflict serious hardship on their hosts. For a long time it even looked like Frédéric Guilbert’s goal would give Villa a lead to take into the second leg in three weeks. But Kelechi Iheanacho came off the bench to plunder the goal that leaves this semi-final intriguingly poised.

Thirty-two miles separate the homes of these clubs but a giant gap has been apparent between the teams this season, a fact that Leicester had rubbed in Villa’s faces with a snazzy 4-1 victory at their place in the Premier League last month.

Nine Leicester players who began that match were included in the starting lineup here, with Jamie Vardy returning to action for the first time since Boxing Day. It would probably have been 10 if Wilfred Ndidi had not suffered an injury in training on Tuesday.

Villa, then, knew this was the moment where their Carabao Cup run got real: their three previous rounds had been against the reserves sides of Brighton, Wolves and Liverpool. Their side had a depleted look here but that was not down to managerial policy. Dean Smith sent out the best team he had available and their mission was to prove that despite the losses to injury of Tom Heaton, John McGinn and Wesley it was not weaker than the one that was outplayed at the beginning of December.

That task was further complicated by the absence of Jonathan Kodjia, who had been Villa’s only fit senior striker until he fell ill on the eve of the match.

Smith deployed Anwar El Ghazi at centre-forward while sticking with the back-three formation that he has introduced in recent weeks partly because of the vulnerabilities exposed by Leicester and partly because of injuries.

Anticipating his opponent’s strategy, Rodgers also switched to a back three, assigning Ricardo Pereira and Ben Chilwell wing-back roles that would, in theory, enable them to maraud forward even more than usual. Ayoze Pérez, meanwhile, operated alongside Vardy.

Villa’s plan worked better early on. They were solid, denying Leicester space in which to conjure. Leicester took a while to find their rhythm and misplaced many passes. It took them 13 minutes to pick a way through the visitors, with Pérez playing a snappy one-two with Dennis Praet before firing just wide from 15 yards. Leicester grew more fluent after that and things got a little dicey for Villa.

Before the 20th minute James Maddison had a shot blocked at the edge of the area; Jonny Evans flicked a header over from a free kick; and Vardy blasted into the side-netting after bursting into the right of the box.

In the 22nd minute Vardy, dashing into the left of the box this time, should have opened the scoring after a dainty through-ball by Pérez. But Orjan Nyland rushed out to narrow the angle and stood up strong to the striker’s shot.

Leicester were still not at their best but a breakthrough for them was starting to look imminent and then Villa detonated a shock with their first attack. El Ghazi, having moved out to the left so that Jack Grealish could take a turn as a centre-forward, curled the ball across the face of goal and Guilbert surprised Chilwell at the back post by darting in front of him to stab the ball into the net.

Now Leicester faced the sort of test that they must learn to overcome if they are to fulfil their big ambitions. But they lapsed into confusion and raggedness. Vardy’s booking for catching Ezri Konsa late was symptomatic of their impotence.

Konsa nearly punished them further when he outjumped Kasper Schmeichel to meet a free kick from the left. Luckily for Leicester, he headed against the crossbar, allowing Leicester to reach half-time only a goal down.

With Praet unable to fill the Ndidi-shaped void in midfield, Rodgers replaced the Belgian with Hamza Choudhury for the second half. The newcomer added more steel but Leicester still had to summon more fluency and ingenuity to unlock. When they did create openings, they would have to show more composure than Youri Tielemans in the 53rd minute when he wafted a shot wide after a slick exchange with Maddison.

Konsa, Tyrone Mings and Kortney Hause were outstanding in the heart of Villa’s defence, ensuring Nyland was not as busy as Leicester’s possession suggested he should have been. But the keeper had to make a couple of fine saves to foil Maddison.

He was helpless in the 75th minute, though, when Iheanacho, just after replacing Pérez, rammed a shot past him from 16 yards. The chance came from strong play from Leicster’s other substitute, as Choudhury dispossessed Douglas Luiz near halfway.

Vardy had a chance to fire Leicester in front through a late counterattack but shot just wide. – Guardian

Solskjaer requires more than Sancho to mount a title tilt 21:46
No fans, no problem as far as Tiger Woods is concerned in San Francisco 21:29
Second Waterford FC player to undergo testing after reporting Covid-19 symptoms 21:15
Crowd limits to remain at 200 as Government stalls move to phase four 21:15
Ryan Brennan secures the points for 10-man Shelbourne in Donegal 20:18